Rebirth of vinyl in Japan propelled by diversification of music platforms

Vinyl music is enjoying a renaissance, as digital streaming services generate interest in records once more.

Japan's electronics and entertainment giant Sony is making a move to ride this latest wave in the music industry, with Sony Music Entertainment (Japan) Inc. recently announcing it will resume pressing vinyl at Sony DADC Japan Inc., its disc-manufacturing subsidiary in Shizuoka Prefecture, southwest of Tokyo, after a 30-year hiatus.

Whether because of their grainy, warmer sound or simply because vinyl makes a fashion statement, LPs and EPs are being snapped up by people but not like the old days, surely.

It's not just older fans who grew up with records that are returning to the format, but younger customers who never had the experience of putting an album on a turntable.

"We had been discussing specific ideas for around two years before this announcement, as we observed how things were changing overseas and the corresponding trends in Japan," Aiichiro Furukawa, a corporate senior vice president at Sony Music Entertainment (Japan), said in an interview.

Furukawa said customers want to get their hands on records -- which Sony Music Entertainment (Japan) stopped producing in 1989 as CDs became the dominant format -- after finding their favorite tracks and albums on digital streaming services.

"Some people are buying vinyl records after first hearing songs on streaming services. If they love the music, they want to own them in a tangible analog format," he said.

The company is aiming to roll out a variety of music genres on vinyl from around the end of this year or early 2018, according to Furukawa.

Sony Music Entertainment (Japan) will cover end-to-end vinyl production -- from making masters to pressing records and packaging -- all within its group, and plans to eventually take orders from other companies, too. Initial plans are for Sony Music artists and for distribution in Japan.

A cutting lathe was installed at Sony Music Studios Tokyo in February and a pressing machine has been set up at Sony DADC Japan.

The studio and factory will integrate the production of vinyl to create a streamlined production and manufacturing process.

"We have the freedom of doing things our own way and can make decisions smoothly. That's the advantage of integrated production," Furukawa said.

The vinyl production project started with the training of personnel, with retired engineers returning in advisory roles to provide the necessary expertise.

"We trained people who worked as mastering engineers on CDs and were already familiar with creating sound, rather than training people from scratch who don't have that advantage," said Shingo Miyata of Sony Music Communications Inc., the director at the recording studios. 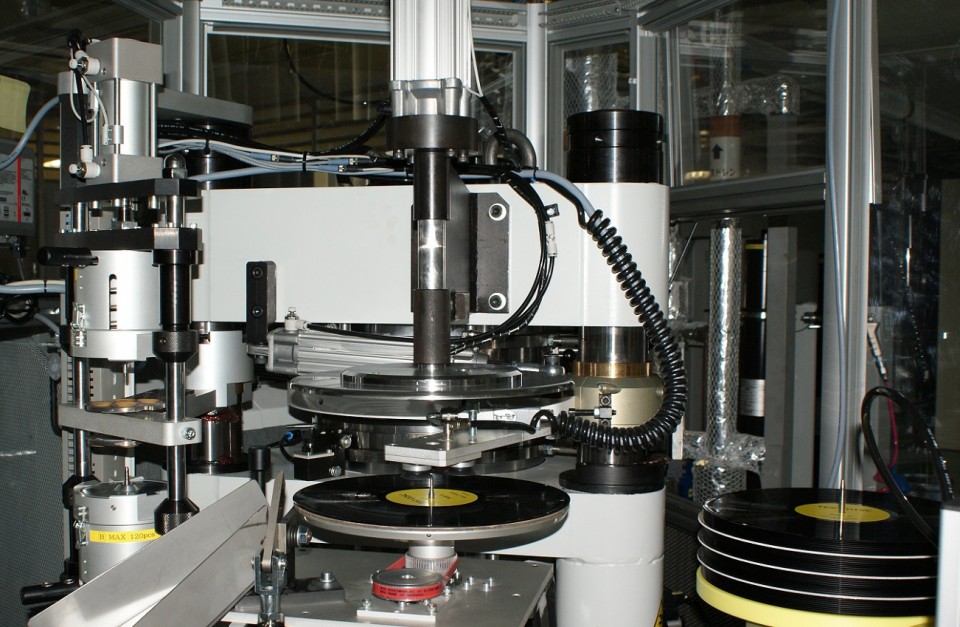 At the factory itself, where only a few people with knowledge of pressing vinyl remain, former employees give technical guidance and support training, according to Mitsuhiro Sakakibara, an executive vice president at Sony Music Communications Inc.

Sony Music Entertainment (Japan) had been outsourcing all manufacturing of vinyl to Toyokasei Co. who remained the only vinyl manufacturer in Japan as well as overseas companies, but will now have the ability to manufacture in-house.

But consulting firm Deloitte predicts that in 2017 vinyl sales will approach the $1 billion benchmark and will globally generate 15 percent of all physical music sales as well as 6 percent of all recorded music revenues.

Sales of turntables and other vinyl-related accessories are also enjoying a resurgence as a result of vinyl's comeback.

In Japan, Panasonic Corp. launched a new turntable model in May following the launch of a record player last year to meet the increasing demand for analog records. Sony also brought out a new turntable last year.

"It's not just old people who grew up listening to analog records that are buying vinyl, but young people too," Furukawa said. "Many of them are attracted to the sound quality, while there are others who like the artwork and buy records to put on display," he said.

Some young musicians are even saying they want to release their music in the analog format, according to Furukawa.

Although trends in the Japanese music market are broadly similar to those globally, there is one distinctive difference. CDs remain the format of choice for consumers with a 70 percent market share -- which is very high compared to other countries, according to Furukawa.

Fans take advantage of perks that come with CD purchases, such as tickets to "handshaking events," while loyal fans purchase almost any items related to their favorite artists or idols.

All of which suggests that if musicians dare to put their music on vinyl, their fans can be expected to follow.

But despite the renewed interest in vinyl, sales currently account for only a small portion of total music sales in Japan.

Furukawa said records are not about to replace CDs in Japan anytime soon, but that vinyl is likely to benefit the bottom line.