Tokyo Gov. Yuriko Koike said Thursday achieving success as the host city of the 2020 Paralympics is a greater priority than building a reputation as a successful Olympic host.

Speaking at The Foreign Correspondents' Club of Japan, Koike said she intends to learn from the 2012 London Olympics which she acknowledged as the best ever, and knows Tokyo must look far beyond the Games in order to secure a lasting legacy.

"In Tokyo and Japan we have an aging society, and it is clear there will be more and more people who will be requiring the use of wheelchairs or canes in coming years. Preparing for the Paralympics is preparing for Tokyo's aging population. The challenge of an aging city is a common theme all developed countries will be facing," she said.

"In the case of Tokyo we take the Paralympics as an opportunity to prepare for these coming challenges and how to make the city fully accessible to people with disabilities or other special needs."

Rather than looking at the negativity of a city that needs fixing, Koike has taken on a radical new approach as the first female governor of Tokyo and was head of a newly established political party known as the Tomin First no Kai (Tokyoites First Party) that has secured an outright majority in the 127-seat Tokyo assembly.

According to the 65-year-old former television newscaster, the new and changed Tokyo will boast a culture of kindness and consideration, and to find out what kind of a society that will breed, Koike said she tried using a wheelchair on a non-barrier free sidewalk. 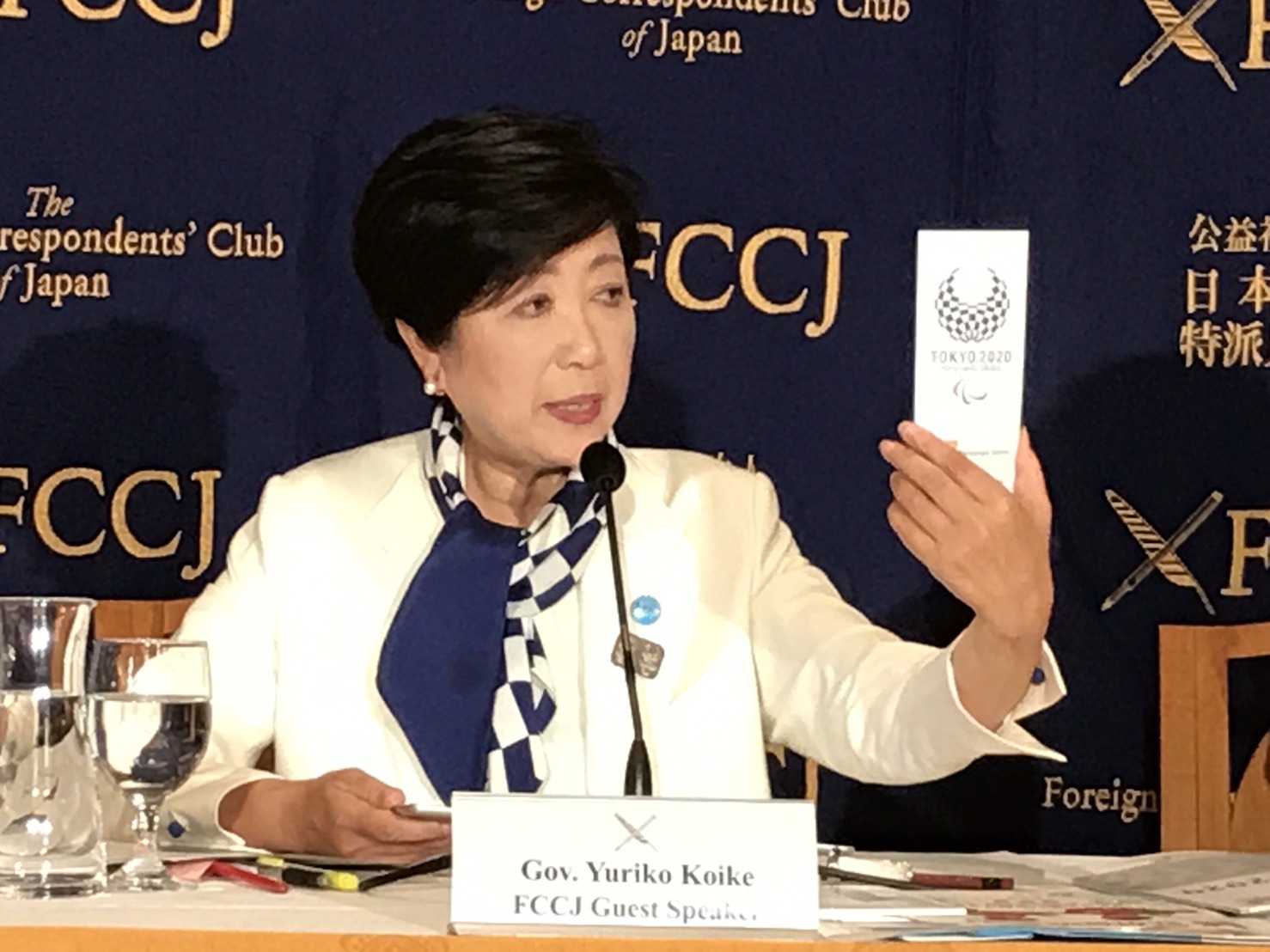 "I was frightened by the slightest slope and I was unable to negotiate even small steps. That is why I want to eliminate the uneven paving of Tokyo's streets and make them accessible and welcoming to match the hospitality provided by the people of this great city."

Koike said she also intends to make Tokyo smoke-free by 2020, an announcement which drew applause from the audience.

She said Tokyo has entered a new phase in its preparation efforts where construction will be speeding up with three years to go to the Olympics. Although many of the venues to be used for the 2020 Olympics will be built from scratch, the government hopes to work together with private management firms that have a better idea of how to utilize the new venues after the Games.

Ensuring safety during the Games is also at the top of Koike's list, and the second-year governor will continue to promote health and safety before and after the multisport event as well as worksite wellness, saying she hopes to see "life" come first for all Japanese when discussing "life-work-balance."

The 2020 Olympics and Paralympics will coincide with the next election for Tokyo's governor, but does Koike intend to extend her term to avoid a clash or run again?

"I am very busy with the daily operations of running the metropolis of Tokyo, therefore I don't have any time to think of my personal issues," she said with a big grin.

Koike is proud that Tokyo has been selected the most livable city by Monocle magazine for the third consecutive year earlier this year and rated the world's best non-American city by Conde Nast Traveler for the first time ever.

"It is very encouraging for Tokyo to receive this recognition and we hope it serves to attract even more individuals and international companies to our city Tokyo."

Koike is aware that barriers stand in the way of Tokyo becoming the full global financial hub it aspires to be. But she said she is doing her share to improve the living environment by taking initiatives such as preparing more international schools, providing more multilingual services in central hospitals and considering more signage in various languages.

"Tokyo is a crowded and vibrant city together at once but that's its charm. It is also the home to the most delicious sushi that you can find anywhere in the world."