The approval rating for Prime Minister Shinzo Abe's Cabinet has risen 8.6 points since mid-July to 44.4 percent after he partially reshuffled his ministers, a Kyodo News poll showed Friday.

The nationwide telephone survey conducted Thursday and Friday showed a turnaround in the approval rating, which last month sank to 35.8 percent, the lowest level since Abe commenced his second stint as premier in 2012. The rate fell following a series of scandals, including cronyism allegations against the premier. 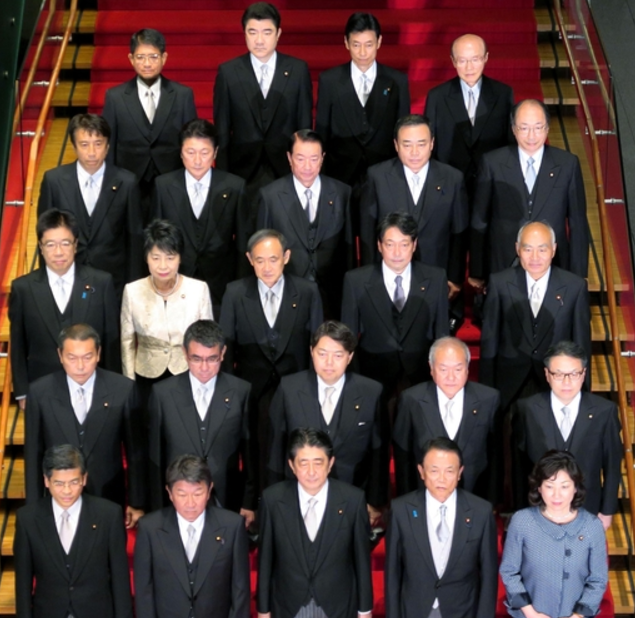 In the survey, 45.5 percent of respondents said they positively view the latest Cabinet reshuffle and the revamped lineup of the ruling Liberal Democratic Party's executives, while 39.6 percent do not.

The disapproval rating for Abe's Cabinet fell 9.9 points to 43.2 percent, almost matching the approval rating. Among those who expressed disapproval, 56.0 percent said the prime minister cannot be trusted, up 4.4 points.

Abe has recently come under fire due to allegations that the prime minister used his influence to sway the approval process for a new veterinary department of a private university run by a long-time friend of his.

Asked about the rebound in approval ratings shown by media outlets after the ministerial changes, Chief Cabinet Secretary Yoshihide Suga told a press conference, "The Cabinet has just been launched."

"We believe it will be important to achieve results in such areas as security and economic recovery...by listening to citizens' voices humbly," he said. 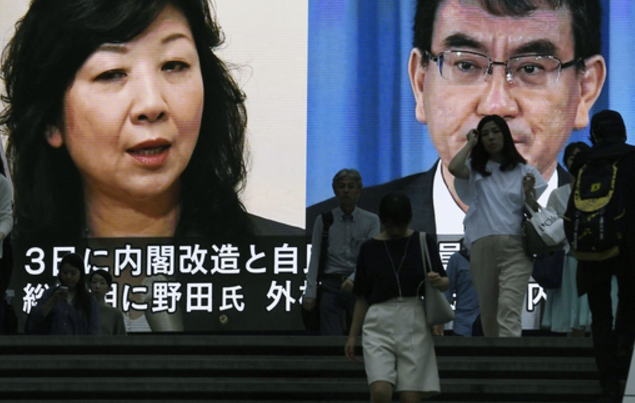 The majority of respondents remained opposed to amending the constitution under Abe, with 53.4 percent opposed, down 1.4 points, while 34.5 percent support an amendment effort.

Regarding the matter of electing a new leader of the main opposition Democratic Party after its current leader, Renho, announced her resignation last week, 40.0 percent said veteran lawmaker Seiji Maehara would be an appropriate choice, while 36.7 percent supported Yukio Edano, a former chief Cabinet secretary. Maehara is a former foreign minister known for his conservative views on defense and other issues.

Both Maehara and Edano have expressed their intention to run as candidates in the party's leadership election on Sept. 1.

Asked what policies the new Cabinet should prioritize, 42.8 percent of respondents cited those related to the pension system, healthcare and nursing care, while 37.0 percent said employment and economic policies.

Regarding when the House of Representatives should be dissolved for a general election, 43.0 percent said a snap election should be called in the fall or winter of next year, shortly before the term expires in December 2018. Some 22.0 percent called for a snap election this year while 11.0 percent want it next spring.

By political party, Abe's LDP was supported by 39.0 percent of respondents, up 7.1 points, and the main opposition Democratic Party of Japan was backed by 7.3 percent, down 0.9 point.

The support rate for the Komeito party, the LDP's junior coalition partner, stood at 5.9 percent and for the Japanese Communist Party at 5.1 percent. A total of 37.9 percent said they do not support any particular party.

The survey polled 725 randomly selected households with eligible voters as well as 1,171 mobile phone numbers, and received responses from 505 and 503 people, respectively. 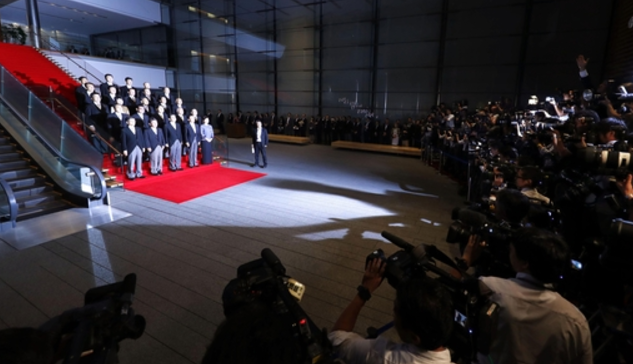