The death toll from widespread violence since Friday in Myanmar's strife-torn Rakhine State has risen to 104 with one soldier missing, the government said Sunday.

Clashes continued throughout Saturday in three townships in the northern part of the state including Maungdaw, where the violence broke out in the early hours of Friday, according to a series of government updates. 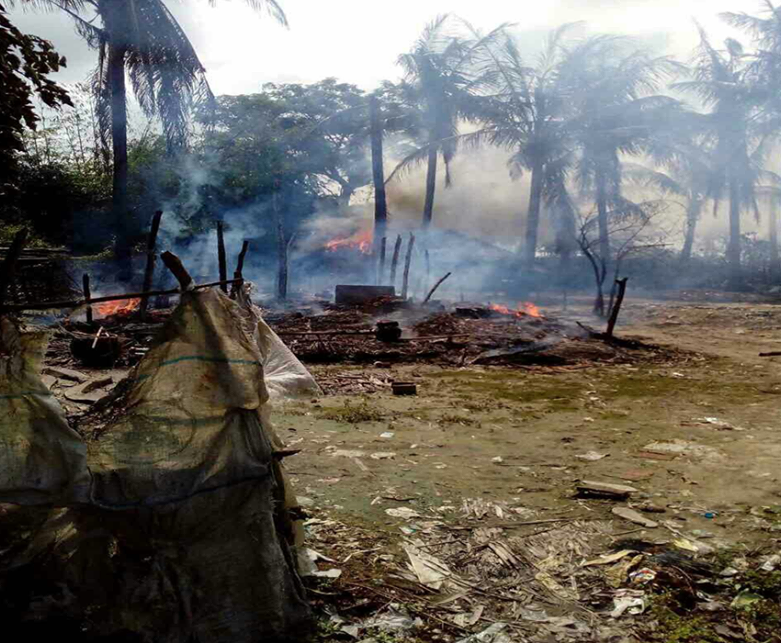 They set off around 40 explosions throughout Saturday, and over 260 buildings including houses, shops, mosques, Muslim schools, Buddhist monasteries were burnt down, according to the updates.

On Saturday evening, at least 2,000 Rohingya Muslims fled the violence by crossing the border into Bangladesh, according to Bangladesh media.

Around 11 p.m. Saturday, a Hindu family of 12 in hiding was attacked by the insurgents, according to the government's latest update. Six of them including three children were killed and two women were injured, while four children escaped, it said.

Separately, a Hindu child whose family lives near a Buddhist monastery died of a gunshot wound around 2 p.m. Saturday when the monastery came under gunfire, the update said.

Also Saturday, a Muslim who works under a village head was killed around 1 p.m. at his home.

Late Friday, four Muslims including a village head and a government informant were killed at their homes.

The reported fatalities comprise 80 insurgents, 10 policemen, 12 civilians, a soldier and an immigration officer. The latest update gave no details on the number of injured.

Residents in Maungdaw are worried about shortages of food and other basic good as supplied have been virtually shut off since Friday due to the clashes.

The relief and resettlement ministry said up to 4,000 Rakhine Buddhists have been displaced by the violence in the three townships.

Myanmar leader Aung San Suu Kyi's office on Sunday said that the country's intelligence indicates that staffers of some international nongovernmental organizations are joining the extremists in the attacks.

The clashes broke out in Maungdaw around 1 a.m. Friday when "extremist Bengali terrorists" attacked security outposts and police stations in 24 separate locations in the area, which is mostly populated by minority Rohingya Muslims.

This is the most significant outbreak of violence in Rakhine since October 2016, when nine border police stations and outposts in the region similarly came under simultaneous attacks, resulting in the deaths of nine officers and eight attackers.

In a statement issued in Friday evening, Suu Kyi condemned the attacks and said they were intended to coincide with the release of a report by a commission chaired by former U.N. chief Kofi Annan.

In the report published Thursday, the Advisory Commission on Rakhine State warned of the risk of fresh rounds of violence "unless concerted action -- led by the government and aided by all sectors of the government and society -- is taken soon."