A New Yorker whose long-standing meditation practice helped her cope with the stresses of corporate life has created the city's first mobile meditation studio to spread Buddhism-inspired calm in the harried metropolis.

Kristin Westbrook, the founder and CEO of Calm City, started making pop-up appearances in a converted RV in May, parking in busy areas of Manhattan and offering passersby the chance to take part in 10 minutes of guided meditation for $10.

Westbrook, who earned a meditation teaching certificate after hatching the idea last year, said she wanted to make the centering experience "as convenient as walking up to a food truck."

"I've had people who have never meditated before and have no idea what it is, and I've had people that are longtime meditators (who) want to sit" as part of their practice, she said.

After spotting the vehicle parked on Broadway, Holly Carter, 43, decided to step in for a quick repose during her lunch break.

"I think it's a really good idea," said Carter, a writer who recently started meditating using an app with three-minute recordings for beginners. "It's easier than I thought to unwind, sort of forget where you are and take a moment for yourself, which I think a lot of us (in New York) don't do enough of," she added. 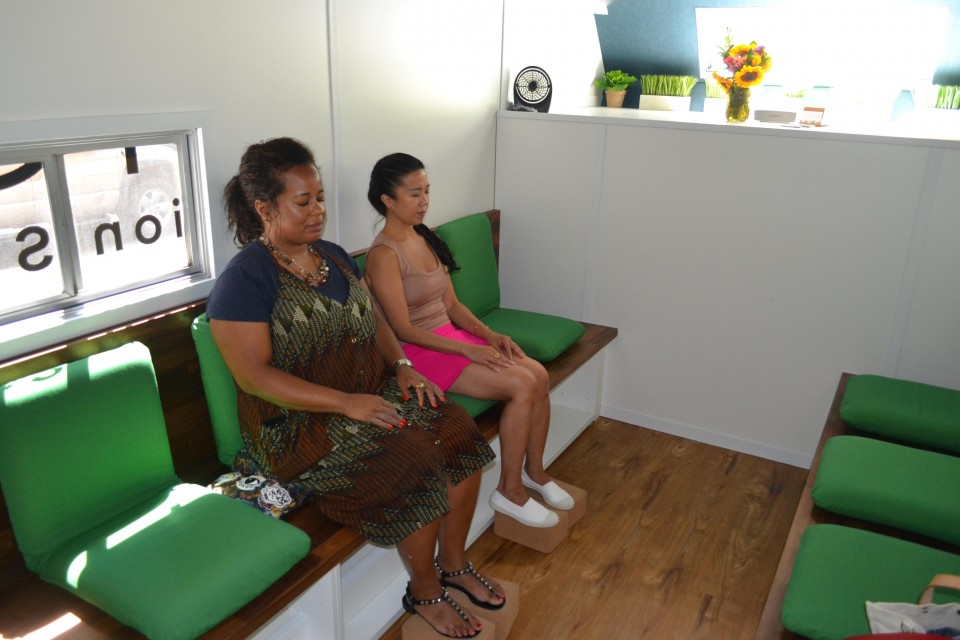 A New Jersey native who has lived in New York City since 1985, Westbrook, 50, is drawing on her background as a corporate creative director to launch the current venture, the first application of her design skills to a personal wellness business.

In addition to creating the start-up's website, logo and promotional materials, Westbrook also designed the meditation space in the vehicle, a 1976 model bought from an online seller last October and renovated with the help of friends and family.

The climate-controlled space seats up to nine people, with legless Japanese-style chairs on top of walnut benches. Clients can sit cross-legged if so inclined, or with their feet resting on the floor or on blocks. Removal of shoes is optional.

"I wanted to make it as easy as possible," said Westbrook, who first joined a Buddhism-based meditation group in 2001. She describes her early practice as sporadic at times, but a major source of peace and "non-attachment" during her corporate career, and especially as she overcame two bouts with breast cancer in 2010 and 2012.

Her effort to spread the benefits of meditative practice to other New Yorkers is still in an early phase. The first truck is a "prototype" as she gauges interest.

For her appearances in the city, which take place roughly three times a week, Westbrook picks a spot near Times Square or other busy midtown locations and arrives early in the morning to find parking. The brief meditation sessions begin every 15 minutes throughout a shift typically lasting four hours or more.

As passersby in the heavily-trafficked blocks of tourists and businesspeople discover the roving studio, word of mouth has led to some companies reserving it for events or as a gift for their employees or potential clients. Westbrook has yet to invest in advertising.

The bustling atmosphere, however, also means that she has to factor in the inevitable city noises such as traffic and sirens.

"There are always going to be distractions to meditation, (even) if you were sitting in a field under a tree," Westbrook said. To cope with outside noises, she advises customers to be gentle with themselves and simply "call (their) focus back to the breath."

"You're always beginning again, and that's what the practice is."

Each session is carried out using an audio track specially recorded by Westbrook's meditation teacher, Marlie McGovern of the Nalanda Institute for Contemplative Science.

For the time being, Calm City is a one-truck outfit, though the potential exists to add more vehicles in New York or even expand to other cities. According to Westbrook, the only similar mobile meditation hall in the United States operates in Detroit.

Given her background, Westbrook sees a big opportunity in providing stress relief and a team-building activity for the corporate world.

However, she also considers reaching others in high-stress professions such as corrections officers, firefighters and hospital workers.

"I would like to create (something) like Superman's phone booth on every corner," she said, envisioning spaces where people could "pop in, connect with their inner super powers, and get on with their day."

"Everyone can benefit from the practice of meditation, without a doubt," she said.