The hard-throwing right-hander, who will turn 23 on Wednesday, allowed a run in the first inning of the Nippon Ham Fighters' 5-2 Eastern League win over the Seibu Lions at the Fighters' minor league facility outside Tokyo in Chiba Prefecture. 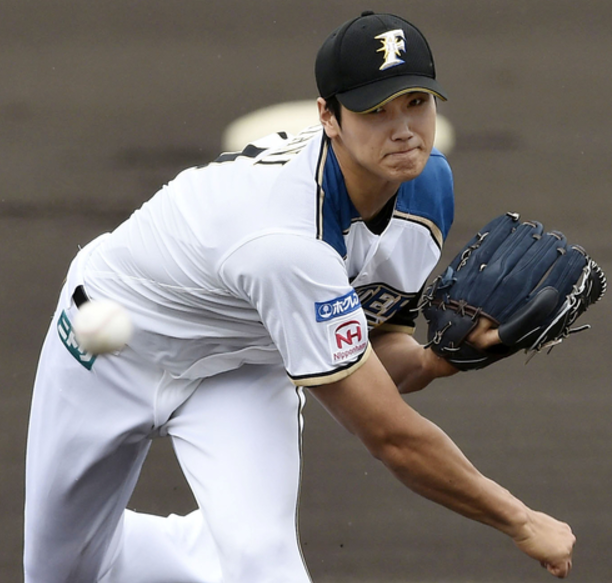 Otani was able to locate his fastball reasonably well, although it lacked some of its usual life, while it hovered around 152 kilometers per hour. His breaking pitches, however, rarely came anywhere near their mark.

"I thought the best thing was to go after batters, challenge them in the strike zone," said Otani, who is expected to move to the majors this autumn and performed with major league scouts in attendance. "Being able to pitch means one more step I've cleared."

He struck out two batters swinging before Hotaka Yamakawa homered over the center field wall. Yamakawa, a young slugger who hit home runs last season even more often than Otani, last blasted a 1-0 fastball that got more of the plate than Otani wanted.

Otani then walked a hitter and hit another with a breaking ball before ending his stint with a flyout.

"It's still too early (to be pitching on the first team)," he said. "I've only just started pitching. Now I want to do my best so I'm able to pitch to my satisfaction."

Because of his injuries, Otani had been exclusively used as a hitter this year and started the season under orders not to run full speed. Even so, he injured a left-thigh muscle trying to beat out an infield single on April 8 and didn't resume play with the first team until Tuesday.

Otani's previous game as a pitcher had been Game 1 of last year's Japan Series on Oct. 22. He hurt his ankle later in the series and aggravated it in November while playing for Japan, ruling him out of March's World Baseball Classic.

Last year, Otani was named the Pacific League's Most Valuable Player and was the first player to win Best Nine Awards at two different positions, pitcher and designated hitter.