Japan has expanded the list of standardized pictograms used in signboards and posts as part of an effort to better serve foreign visitors in the run-up to the 2020 Tokyo Olympic and Paralympic Games.

Fifteen pictograms have been added to the existing list of about 140 signs in addition to seven changes as the Ministry of Economy, Trade and Industry revealed Thursday a final draft plan subject to two-year trials before it is officially put in place. 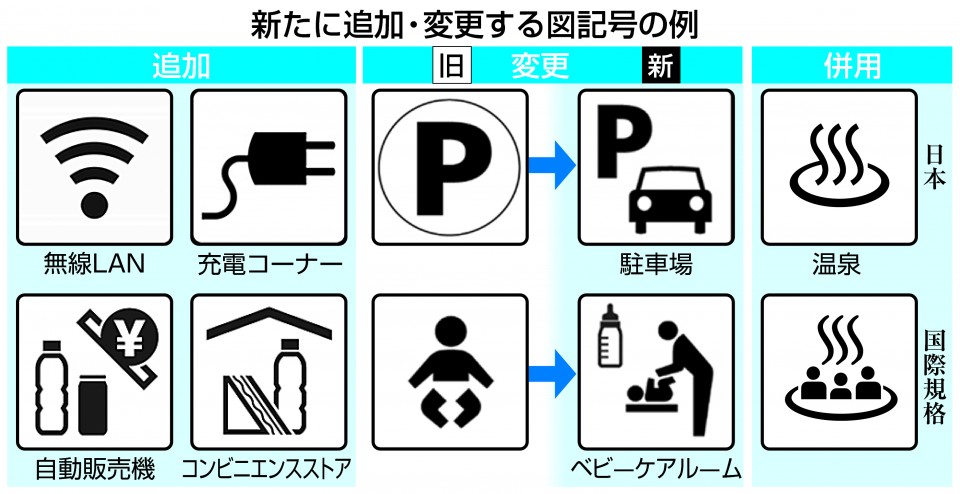 The original plan to change the hot spring pictogram will be reconsidered in response to strong requests for it to remain, with the ministry's final draft calling for using both the current and new signs.

The existing onsen sign has long been familiar to people in Japan with its three short wavy lines emerging from a circle, but has raised concern foreign visitors might mistake it for something like a steaming plate of hot food.

It is the first time a set of such standardized pictograms has been reviewed since 2002, when Japan co-hosted the World Cup soccer tournament with South Korea.

Pictograms were first officially introduced to the Olympics at the 1964 Tokyo Games. They have become an essential facet of the sporting events in passing on information to participants and visitors with diverse language and cultural backgrounds.