Houston Astros outfielder Norichika Aoki marked the 2,000th hit of his professional career in Sunday's game against the Los Angeles Angels, becoming the seventh Japanese to reach the number playing in Nippon Professional Baseball and the majors.

The 35-year-old singled to left field in the bottom of the sixth inning at Minute Maid Park for the second of his day's three hits and 716th hit in the major leagues, although the celebratory mood was dampened when the Astros eventually lost 12-6.

Aoki, who is playing for his fifth team in six years in the majors, had 1,284 hits during his eight seasons in the NPB with the Tokyo-based Yakult Swallows. 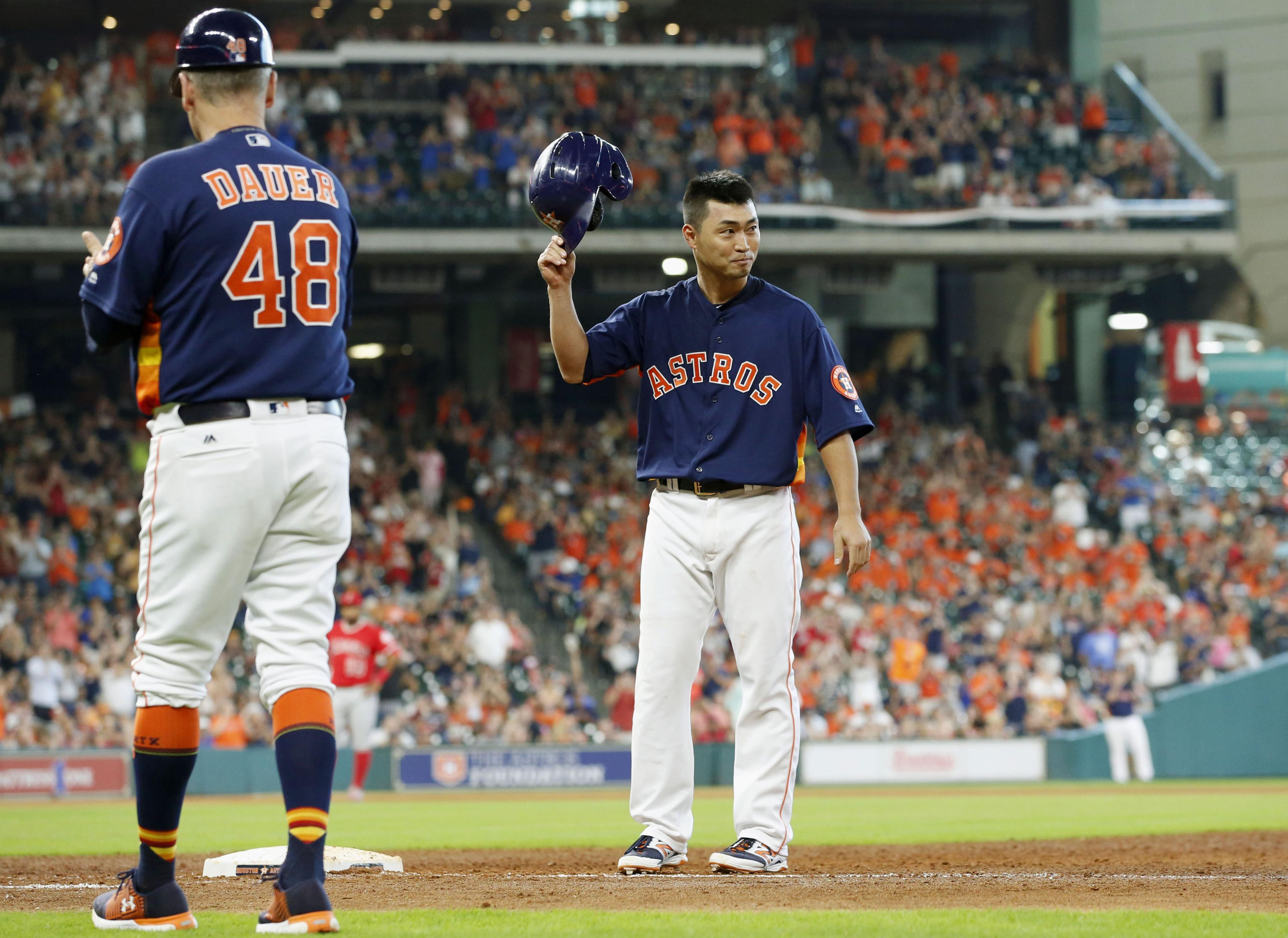 "The number marks an end to one chapter of my baseball career," said Aoki.

"I was determined to do it here. I'm fighting to survive while I play so not any one particular hit stands out as they're all meaningful."

Ichiro Suzuki, Hideki Matsui, Kazuo Matsui, Norihiro Nakamura, Tadahito Iguchi and Kosuke Fukudome are the other Japanese players with 2,000 combined hits between their careers in the NPB and Major League Baseball.

While he played for the Swallows in the Central League between the 2004 and 2011 seasons, Aoki became the first NPB player to record 200 or more hits in a single season twice, a feat not even achieved by Suzuki, a member of the 3,000-hit club.

"When I became a pro, my university coach Toru Nomura told me, 'Each professional player is a private shop. Don't be the same as others and acquire your own characteristics'," Aoki recalled.

"I was unable to hit as much as I used to after coming to the majors due to my lack of power against fastballs and unbelievable defense by opposing field players, but the only way to overcome that was by continuing to train no matter what without giving in and heading to the next game."

On Sunday, a crowd of 32,425 took a moment to give a standing ovation to Aoki, who earned himself an automatic induction into the Meikyukai (Golden Players Club) for players with at least 2,000 hits. Aoki responded by removing his cap and taking a deep bow.

"I'm really happy to get the applause as it feels like my personal baseball history has been recognized here," said Aoki, whose long-awaited moment came in his eighth game of the season with multiple hits.

"I've been far from my best form this past month, but my offensive play today was ideal," said Aoki, adding that he should be in no laughing mood as the team lost.

Named three times to the World Baseball Classic squad, Aoki is also a three-time batting leader, two-time hits leader and one-time stolen base leader in the CL. He was named CL rookie of the year in the 2004 season, and went on to win the Best Nine Award seven times and Golden Glove six times.

"He worked hard for it. He deserves all credit. (As a rookie in NPB) you could see the determination in his eyes. (In the majors) his bat control improved and he's now able to hit low pitches," said former Swallows manager Tsutomu Wakamatsu.

Aoki's father Hitoshi said, "He's been building up toward this. He wasn't the kind of player who entered the professional world aiming to get 2,000 hits, so we family members never even thought about it."

Aoki, who is batting .269, reflected on his first-ever hit and said he is more passionate about baseball today than he was then, adding that his immediate goal is to help the Astros become the World Series champion. 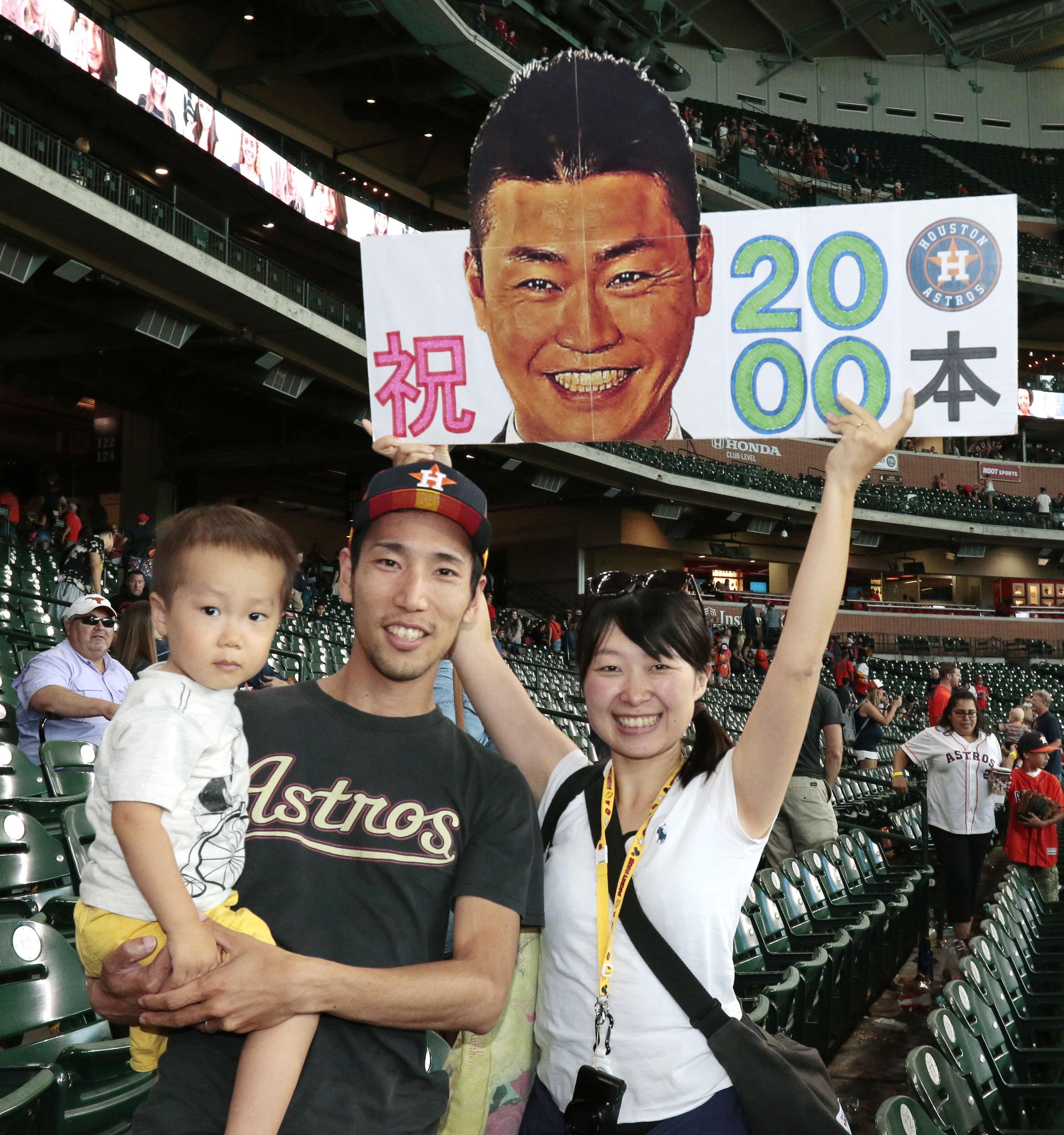