The website "will help promote understanding of the DPRK's foreign affairs and policy," the Korean Central News Agency said, using an acronym for the country's official name, the Democratic People's Republic of Korea.

The site will also "contribute to boosting the relations of good-neighborliness, friendship and cooperation between the DPRK and other countries in the idea of independence, peace and friendship," it said.

It is unusual for a North Korean ministry to establish its own website. It appears aimed at strengthening external dissemination of the country's positions and arguments.

Available in both Korean and English language versions, the website can be accessed at www.mfa.gov.kp. 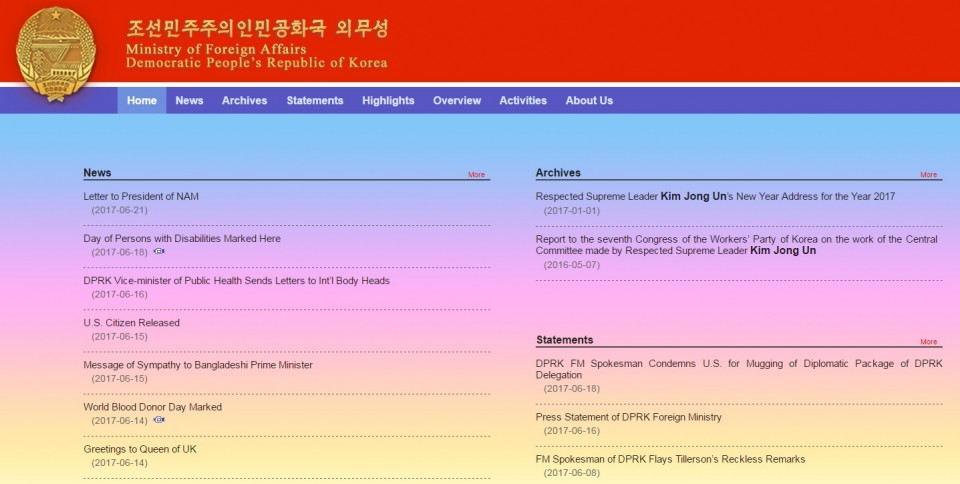 It has over 100 articles, among them Foreign Ministry statements, news items accompanied by photographs, descriptions of the country's geography, history and political system, and profiles, speeches and "works" of its past and current leaders.

In describing North Korea's foreign policy, the website says it seeks to develop good relations "with all the countries and nations which respect its sovereignty, do not interfere in its internal affairs and treat it on an equal footing."

The website offers a glimpse into the Foreign Ministry's structure, showing the existence of at least 11 departments, though without revealing the names of any of its personnel.

Europe is likewise covered by two departments, one of which is solely dedicated to Russia and 11 other former Soviet republics.

Under the ministry's umbrella are three institutes that conduct research on U.S. affairs, Japan affairs, and "disarmament and peace."

The website says the Institute for American Studies "undertakes research into the nature and background of, and ways to remove the U.S. threats leveled against the DPRK and conducts in-depth study into the nuclear issue and the DPRK-U.S. relationship from the perspective of ensuring national security."

It says the Institute for Studies of Japan "conducts research on historical, territorial and other pending issues with Japan as well as studies on different aspects of Japan including politics, economy, military, diplomacy and culture."

That institute also "undertakes contact and exchange with institutes, scholars and journalists of Japan." It involves analysts, Foreign Ministry officials, scholars, journalists and "editors of social science, mass media and other relevant areas."

Among several civil organizations sponsored by the ministry is the Korea-Japan Interchange Association.