A theme park in Japan's northernmost prefecture of Hokkaido is in desperate need of ninja to satisfy a growing number of foreign visitors.

The Noboribetsu Date Jidaimura, located near the famous Noboribetsu hot spring resort, holds ninja action shows that have proved so popular among tourists from abroad that it needs more actors to play the feudal mercenaries.

The park, featuring houses styled after the Edo period (1603-1868), hopes to double the number of ninja shows it puts on from the current four a day, but it is difficult to do so with just eight actors and the physical nature of the job.

"I wake up in the morning and my back and knees hurt," said 42-year-old Toshiyuki Jimbo.

In a show held inside the Ninja House in mid-April, four "ninjas" showed off their combat skills, fighting with swords while rolling on the ground to dodge attacks.

Inside the 300-seat auditorium it was standing room only and the audience, including many Chinese, threw coins to the stage in satisfaction after the 20-minute show.

But the number has since bounced back and hit 315,000 in fiscal 2015 thanks to a surge in visitors from other Asian countries.

In the face of the growing demand for ninja shows, the park has taken various approaches to recruit actors, including holding bus tours targeting drama students and releasing online video clips showing ninja actors talking about the joy of their work.

The efforts have paid off to some extent, with the park succeeding in recruiting three women in the fiscal 2017 round of recruitment, although they still need to be trained for three years or longer to be considered fully fledged.

The park plans to bring in freelance actors during busy seasons, but hopes to recruit more actors to resolve the shortage.

"We welcome those who love ninjas and have experience in sports," said Keiji Yamada, 60, who is in charge of the shows at the park. "You do not have to be able to do a backflip." 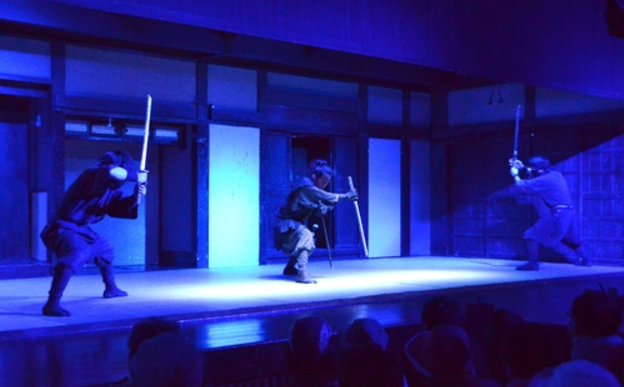