With no team of their own to get behind, Japanese fans enthusiastically threw their support behind either England or South Africa, the teams competing in Saturday's Rugby World Cup final.

Ahead of the biggest match of the rugby's showpiece event, Japanese fans gathered at International Stadium Yokohama (Nissan Stadium) showing their support for world No. 1 England or No. 3 South Africa by wearing their colors.

People from around Japan, whose national team, the Brave Blossoms, were knocked out in the quarterfinals by South Africa, came up with various reasons for their choices.

Masayoshi Iwasa, a 53-year-old from Tokyo, said he is rooting for the Springboks because he wants to see Rassie Erasmus' men achieve what the Brave Blossoms were unable to do at the quadrennial event.

"I was really moved by Japan," Iwasa said of the team that reached the quarterfinals for the first time. "Since South Africa beat Japan (for the host nation's only defeat), I want them to connect with the Brave Blossoms' mindset."

Iwasa said he first saw the Springboks play at the 2007 World Cup in France, when they went on to claim their second title. He hopes to see that history repeat itself in Yokohama.

While South Africa fans stood out with their green jerseys, there may have been more wearing England's white.

Nobutaka Eguchi, 47, said he was supporting England because the side is led by former Japan head coach Eddie Jones, who masterminded the Brave Blossoms' famous 2015 World Cup upset over the Springboks. 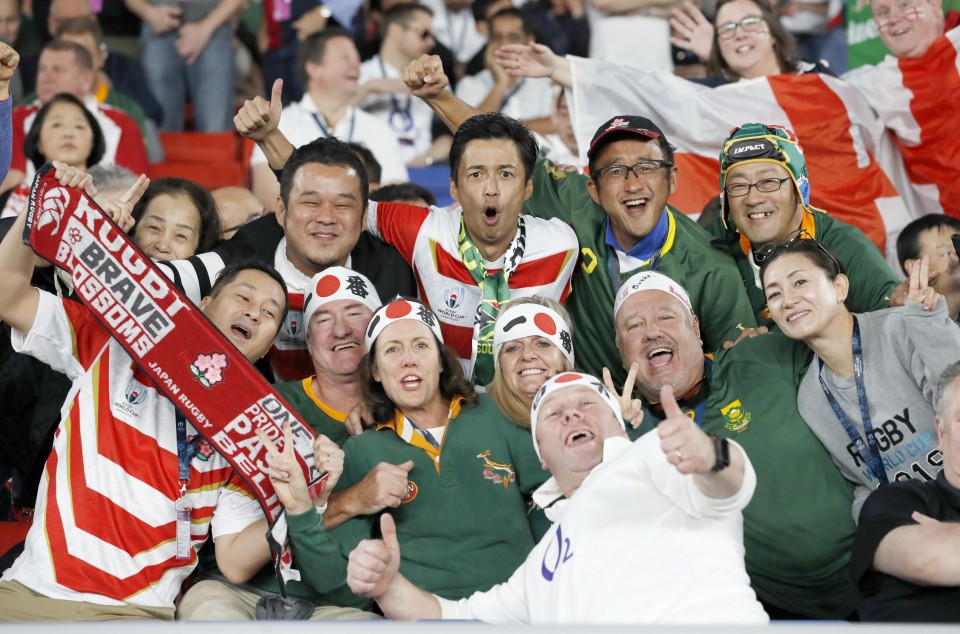 "Eddie-san is a special person for us Japanese rugby fans," said Eguchi, who came to the venue with his wife Yukiko, 43. "He led Japan to what many people thought was impossible, and changed how we viewed the tournament."

"We used to watch university rugby a lot rather than the national team, because there was a huge gap between Japan and the rest of the world. Japan has really improved since then so I want to see the country host the World Cup a couple more times."

Hiro Sato, a 13-year-old junior high school student, said he fell in love with the sport and the England team since watching them beat the All Blacks in the semifinals.

"Their passes were really accurate and quick, and their tackles were impressive," said Sato, who came to the match with his father Fumihiko.

One couple travelled for more than 1,000 kilometers from Kagoshima to support South Africa, who held their pre-tournament camp in the southwestern Japan city.

"I saw on the news that they seemed to enjoy the city, and they really respected our culture and learned about it," said Hitomi Nakamura, 60. "I wanted to show that people from Kagoshima are behind them."

Her husband Akira, 60, started playing rugby in high school and acted as a match doctor in three games held in Oita. He said hosting the World Cup has a chance to change Japan.

"It's sad that this is the last match, but if more people take up the sport and if children really enjoy it, then I think that is a legacy the World Cup leaves behind," Akira said.

"I think the World Cup will come again to Japan. It's a new motivation for me to stay healthy. One can't really die before the next tournament."