With so many permutations as to which teams from Pool A will reach the quarterfinals of the Rugby World Cup -- made more complicated by the possible intervention of Typhoon Hagibis -- the South Africa coaching team are not looking too far ahead.

The Springboks should confirm their spot in the quarterfinals on Tuesday and as the runners-up in Pool B will play the winner of Pool A. 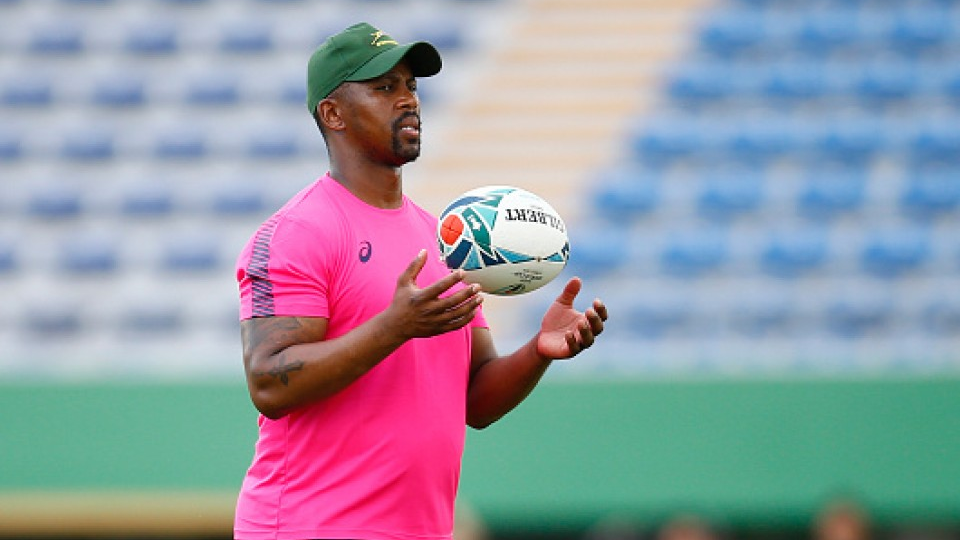 But backs coach Mzwandile Stick said Monday "At the moment, the focus is just on the games we are playing. We know that we might face either Ireland, Japan or Scotland (in the quarterfinals)."

South Africa beat Japan 41-7 in Kumagaya on Sept. 6 in the final warm-up game for the two countries. And that was the last time defense coach Jacques Nienaber said he had really paid attention to how the Brave Blossoms were performing.

"I haven't looked at Japan at all since the last match, bar sitting socially, or working and watching their game," he said. "It was not with an analytical eye. But after Tuesday, we will have a little break, and we have multiple teams we can play in the quarterfinal -- Scotland, Japan and Ireland."

Despite the big win, Nienaber said he was impressed with how Japan played.

"We played them about a month ago, and we were very complimentary about them," he said.

"A lot of people probably thought we were talking them up. But we were not. We know their coaches quite well, we know their players fairly well."

"A lot of our guys are playing in Japan, so they were nice and informative. They are a quality side, with good management, good plans, a fit side, and good individuals."

One of those players is Kwagga Smith who spent last season playing for Yamaha Jubilo in the Top League.

Smith starts against Canada on Tuesday and he said his time here had put him in good stead.

"You get used to the conditions," said the flanker who has also played sevens for his country.

"For a lot of players and teams, the shock when they got here, to realize how slippery the ball is -- although it's not raining. The sweat actually makes it more slippery than if it's raining."

"I'm used to that, and how everything works in Japan and how the people are."

Stick also had his views on the people and the country and how the nation was reacting to the Brave Blossoms' impressive run in Pool A.

"It's good to see a country like Japan managing to (do well), especially as the host nation. You can feel the vibe around Japan -- everyone is excited about the game," he said. "It's always good to see the whole country united behind their team."

"Japan are a very dangerous side, and if you don't rock up on the day, they can punish you. They have good ball players, and good balance between experienced and physical players."

"(But) We will only think about them when we get to that stage."