Scotland picked up the bonus-point win they needed Wednesday to keep their Rugby World Cup quarterfinals hopes alive as they beat Russia 61-0 in front of 44,123 fans at Shizuoka Stadium Ecopa.

Adam Hastings scored 26 points courtesy of two tries and eight conversions and George Horne weighed in with a hat-trick of tries as the Scots set up a tantalizing final weekend of Pool A action.

"The way we played with speed and energy was too much for them," said Scotland captain John Barclay.

Coach Gregor Townsend was equally delighted, though he took time to praise the Russians too, saying it was "a tough game, though the scoreline did not suggest it."

Japan currently top the pool with 14 points, Ireland have 11 and Scotland 10, each with a game to play.

Ireland play Samoa on Saturday in Fukuoka, while Scotland are scheduled to meet Japan on Sunday in the final pool game of the tournament.

However, the approach of Typhoon Hagibis has put the game in Yokohama in doubt.

World Rugby said before the tournament that any game that could not be played would be treated as a 0-0 draw with both teams being awarded two points. That would see Japan through to the quarterfinals and the Scots eliminated.

However, organizers have since talked about "contingency plans" and it is understood any game affected by the weather -- including Saturday's game between England and France in Yokohama -- could be moved to another venue.

Such games would be played behind closed doors for logistical reasons as, particularly in the case of the Yokohama matches, it would be impossible for all those with tickets to fit in a smaller venue.

Russia came into the game in Shizuoka on the back of three defeats, but with nothing to lose they held their own for the opening 13 minutes.

But once man-of-the-match Hastings crossed for the opening try following a big scrum by his pack, it was all Scotland.

The Scottish flyhalf added a second try four minutes later and Horne also crossed the chalk as the men in blue led 21-0 at the break, still needing another try for their bonus point.

"As soon as we got that fourth try we were able to relax a little, the forwards were brilliant," said Hastings.

"We had to have patience -- we could have rushed into things and tried for amazing offloads and big looping passes to score tries, but it really was patience being the key and you saw that from the way we played the game in the first 20 minutes, pinging the corners and putting them under pressure, and the tries came from there."

Five-pointers from George Turner and Tommy Seymour extended the lead before Horne crossed in the 58th minute for his third.

The scrumhalf thought he had added a fourth five minutes later but it was ruled out due to a forward pass.

Barclay and Stuart McInally both touched down in the dying minutes to ensure Russia, who battled valiantly throughout, go home without a point to their name in terms of the scoreline on the day or their overall tournament tally. 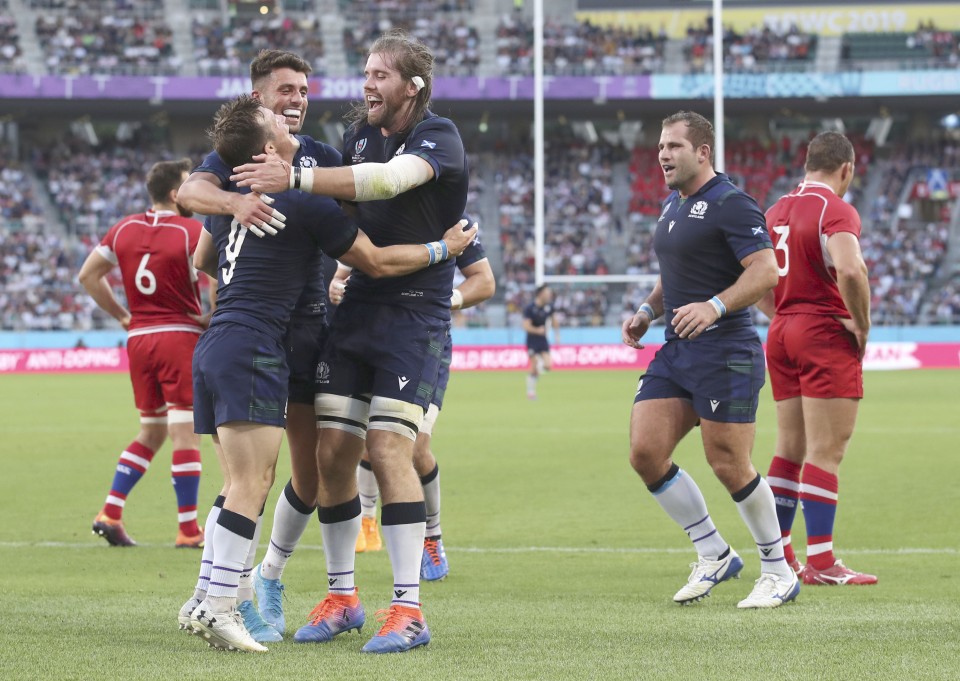 (George Horne (9) celebrates with his teamates)

Russia coach Lyn Jones was still pleased with the way his team have performed in Japan.

"Looking at the tournament overall, we've produced miracles," he said. "We've played well above our weight and today was just one step too far."

"Scotland were quick and fast and had studied us well and marked our game. Fair play to them. They played well."

"Our boys tried hard and it wasn't to be today. We were hoping to finish on a flourish, but so be it."