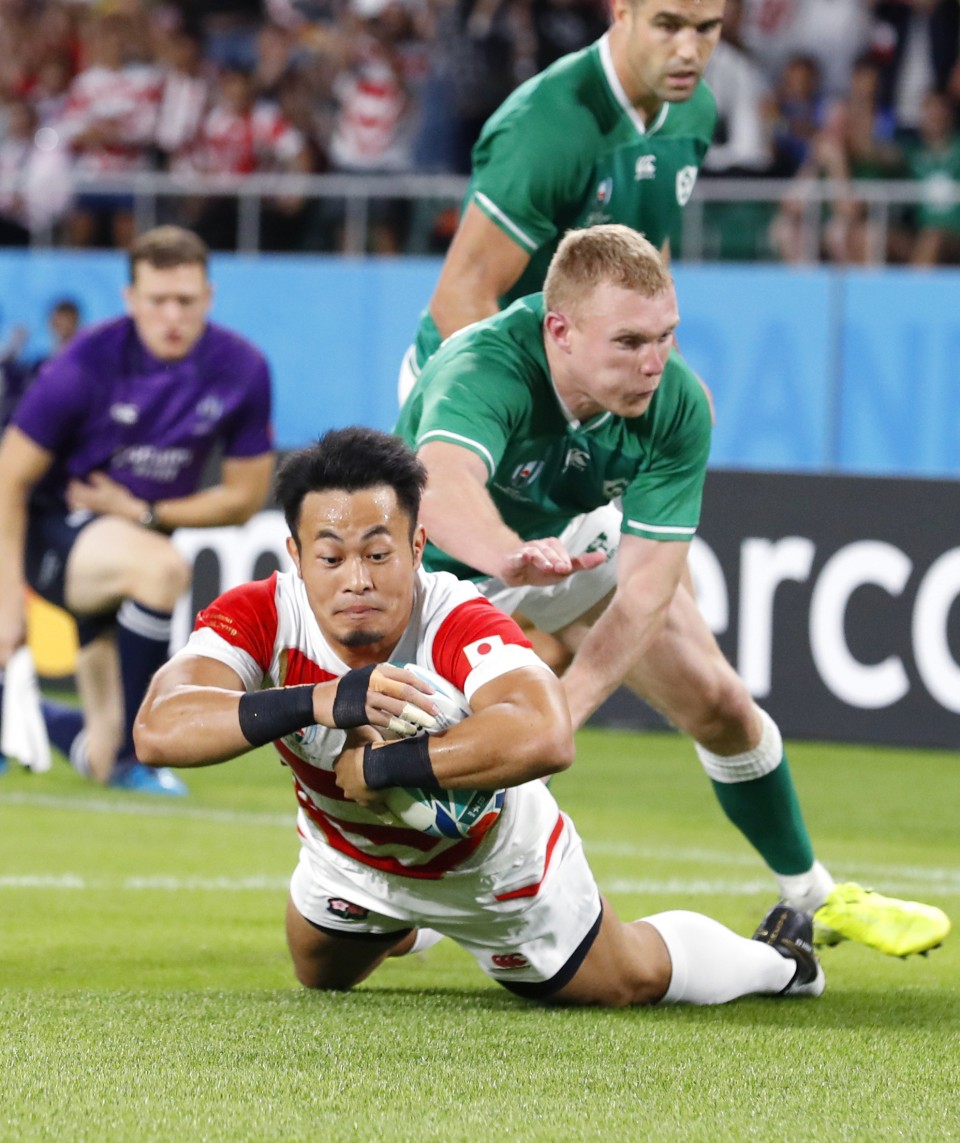 (Kenki Fukuoka of Japan scores a try during the second half.)

FUKUROI, Japan - Japan coach Jamie Joseph said his team needed "to play the game of their lives" Saturday if they were to beat Ireland, and the Brave Blossoms did just that -- defeating the world No. 2 side 19-12 at the Rugby World Cup.

In front of 47,813 passionate fans at Shizuoka Stadium Ecopa, four penalties and a conversion from Yu Tamura and a try from Kenki Fukuoka, who was only added to the side hours before the kick-off, saw Japan record their first-ever win over Ireland and go top of Pool A. 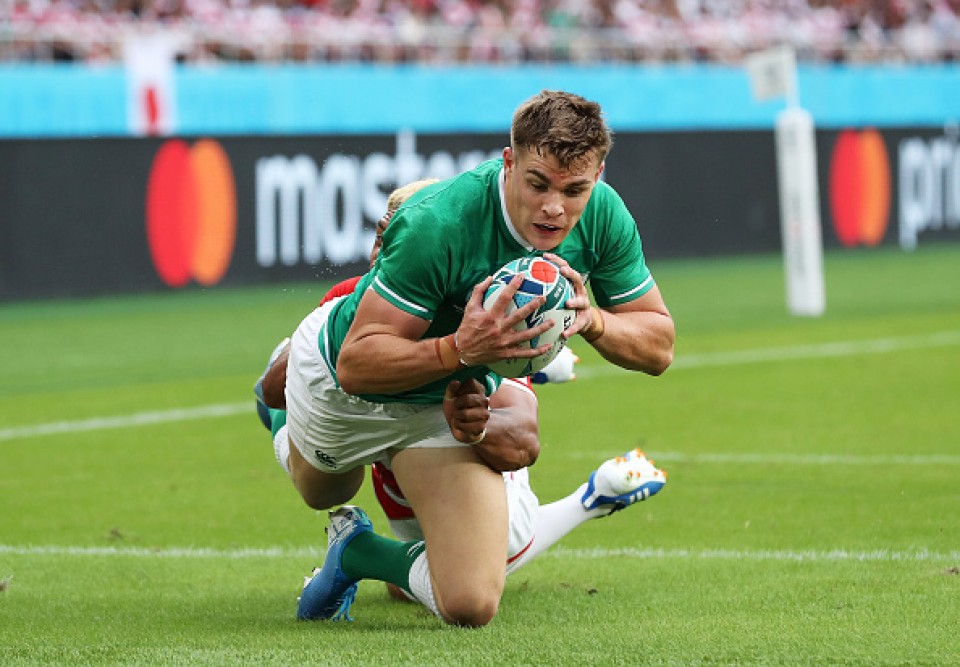 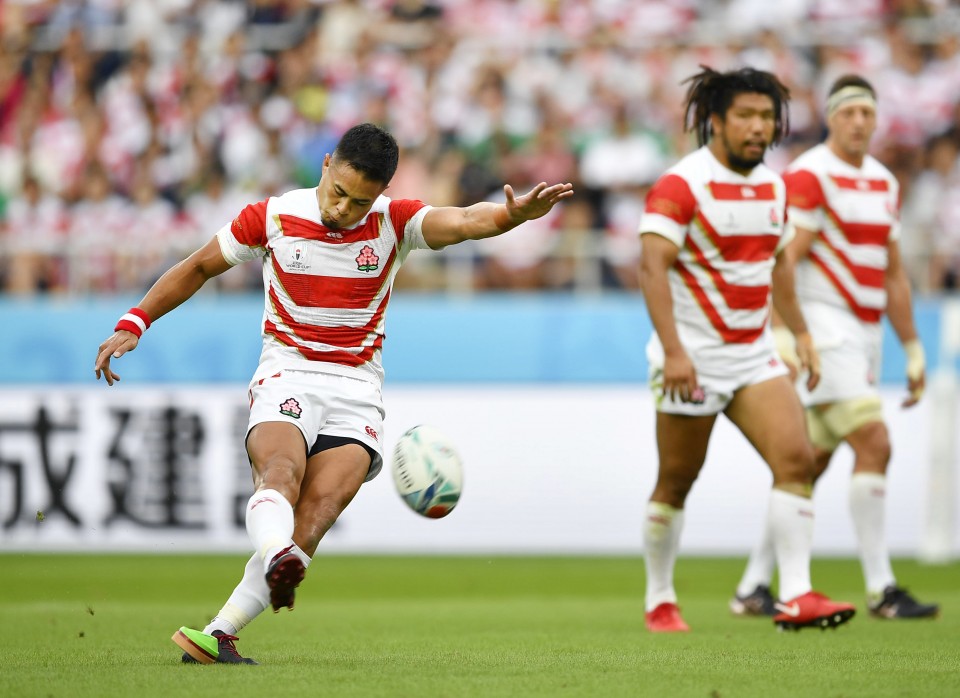 (Yu Tamura of Japan kicks a penalty during the first half.)

"You've just got to be careful before a game like this," said Joseph, whose side move to eighth in the world rankings, their highest position ever.

"You don't want to come across too arrogant and cocky. We obviously had a lot of belief in our game plan and what we wanted to do. We knew how good Ireland were and how strong they were."

"I've got to pay credit to my coaching team. We were able to hold their set piece. We've got a great scrum coach (Shin Hasegawa), and (attack coach) Tony Brown's got a great attack plan, and (we) really worked together towards the win."

The Brave Blossoms were forced to change their line-up after William Tupou injured his left hamstring in the morning, with Lomano Lava Lemeki replacing him on the left wing and Fukuoka coming onto the bench.

Despite the late change, it was Japan who started best amid a wall of noise, keeping ball in hand from the start and forcing the Irish defense to dig deep. 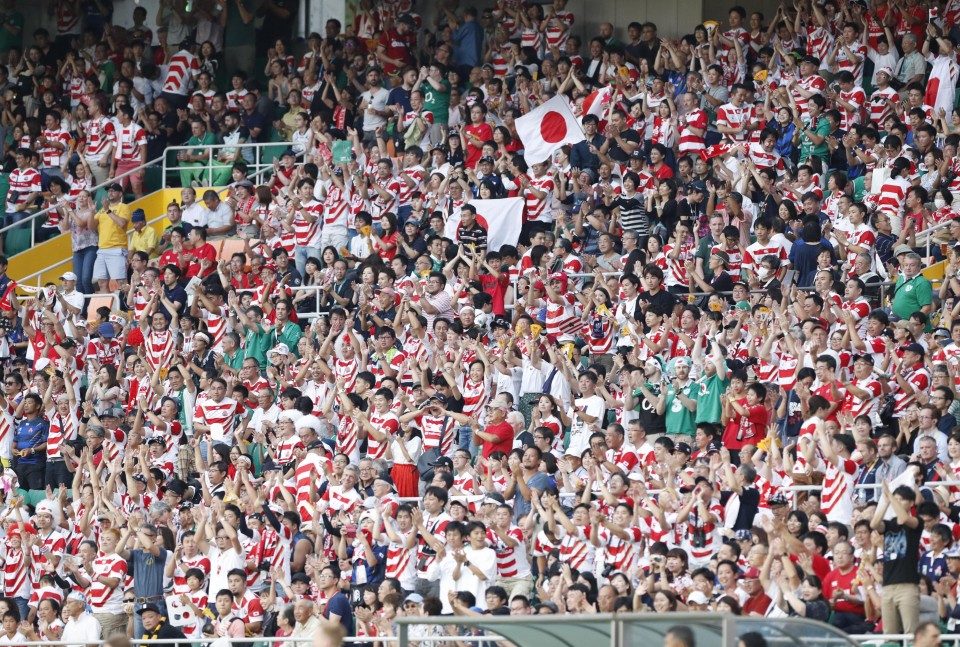 But they were unable to turn pressure into points, with the bounce of the ball preventing Kotaro Matsushima from touching down and Tamura missing a relatively simple shot at goal.

Some quick thinking from Jack Carty almost caught Japan napping, but the Brave Blossoms held firm, with Lemeki clearing his line well on a couple of occasions.

Ireland were relentless though, and another clever kick from Carty found Garry Ringrose, who dived over for the opening try in the 13th minute.

Japan responded quickly with a penalty from Tamura, only for his opposite number Carty to once again produce a clever kick from which Rob Kearney scored. 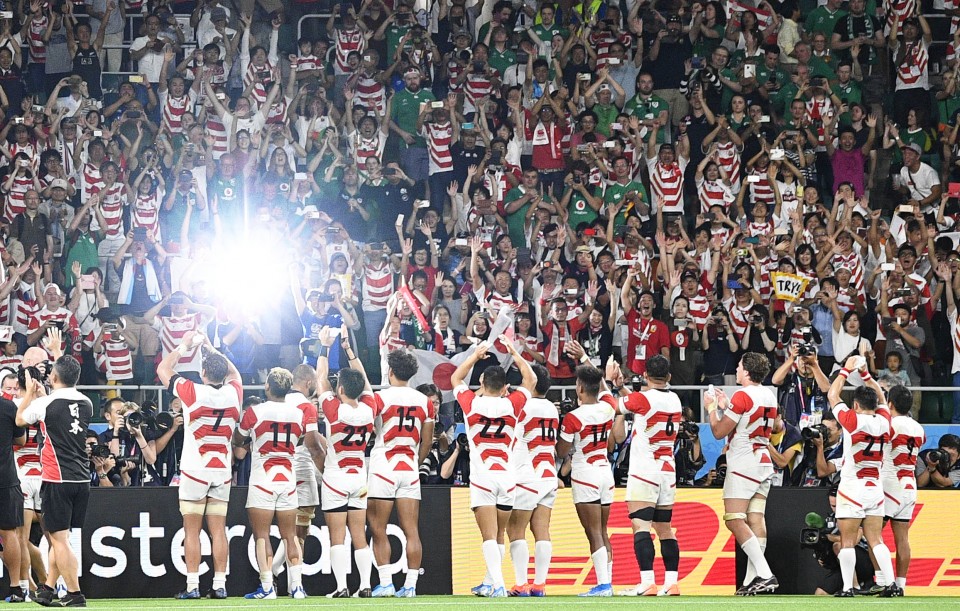 The Brave Blossoms dominated the next 15 minutes as their forwards matched the physicality of the men in green, even stealing an Irish line-out, and another Tamura penalty made the score 12-6.

An impressive Japan scrum nearly took the roof off the stadium before Tamura closed out the half with a third penalty.

The halftime stats showed Japan dominated possession (58 percent) and territory (53 percent). They had also made 92 percent of their tackles and forced the Irish into losing one of their own scrums and one of their own line-outs.

The key would be if they could turn that advantage into points in the second half.

Tamura missed a chance to pull the teams level in the 55th minute with a penalty that was just beyond his range.

But three minutes later, the stadium erupted as Fukuoka went over following some powerful rucking from the forwards and quick hands from the outstanding Timothy Lafaele.

Tamura's conversion put four points between the teams and meant Ireland needed a try, a tough ask given the big deficit they have ever turned around to win any World Cup match was three points.

It became even tougher when Tamura landed his fourth penalty of the night in the 71st minute.

It proved impossible, with the Japan defense holding firm as history was made.

"We knew how tough it was going to be," said Ireland captain Rory Best. "Anyone that has ever been shocked hasn't seen how good they are."

"We came in with a game plan, we felt we were really prepared. Credit to them, they played really well. We made a few mistakes, a few unforced errors, we were on the wrong side of the penalty count. I think Japan played really, really well -- they posed a lot of questions to us and unfortunately we couldn't come up with the right answers."

Veteran lock Luke Thompson, playing in his fourth World Cup for Japan, said he was speechless.

"We played to our potential, did exactly what we practiced that we thought would combat the Irish game."

"We played with so much heart. It was just small things, nothing special. Played with heart and stuck to the game plan."

Rugby: Labuschagne to lead against Ireland with Leitch on bench