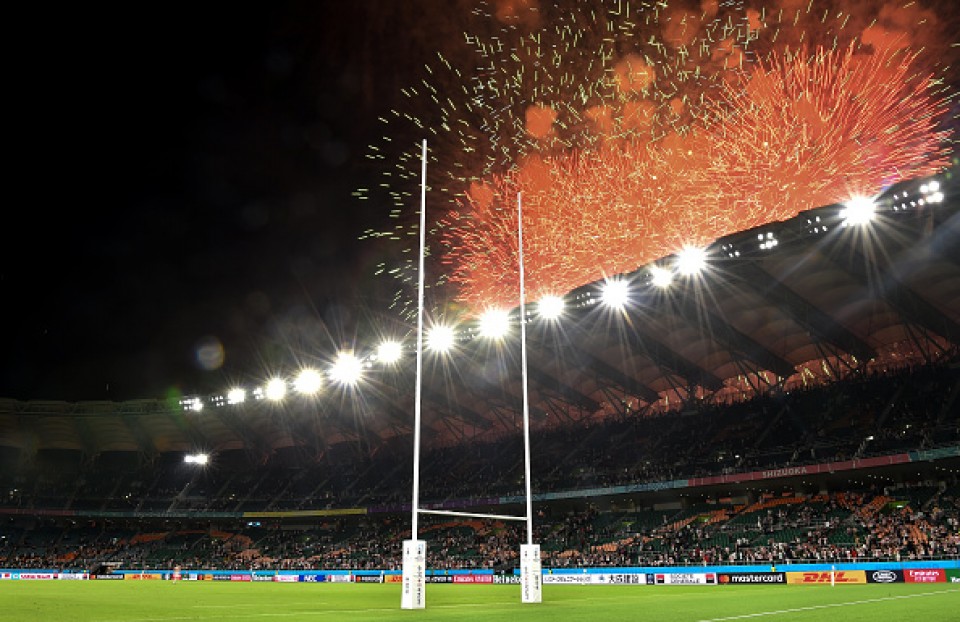 FUKUROI, Japan - Fireworks lit up the night sky in Shizuoka Prefecture on Saturday night following Japan's greatest ever performance on the rugby field.

Inspired by man-of-the-match Shota Horie, the Brave Blossoms' 19-12 win surpassed the Brighton Miracle for the simple reason that Japan came into the Rugby World Cup with a target on their back.

Not only are they the hosts but the win over South Africa in 2015 meant they are no longer a team that is underestimated by the big boys of world rugby.

A nervous, error-ridden start against Russia did not exactly inspire confidence, however, ahead of the game at Shizuoka Stadium Ecopa -- particularly when two days later Ireland were so ruthless and good in beating Scotland.

But on Saturday night, in front of a crowd that never let up in their support, the Brave Blossoms put in a performance that highlighted just how much this team has come in terms of its physicality and mental strength.

Game captain Pieter Labuschagne went to great lengths to say the result was a collective effort. 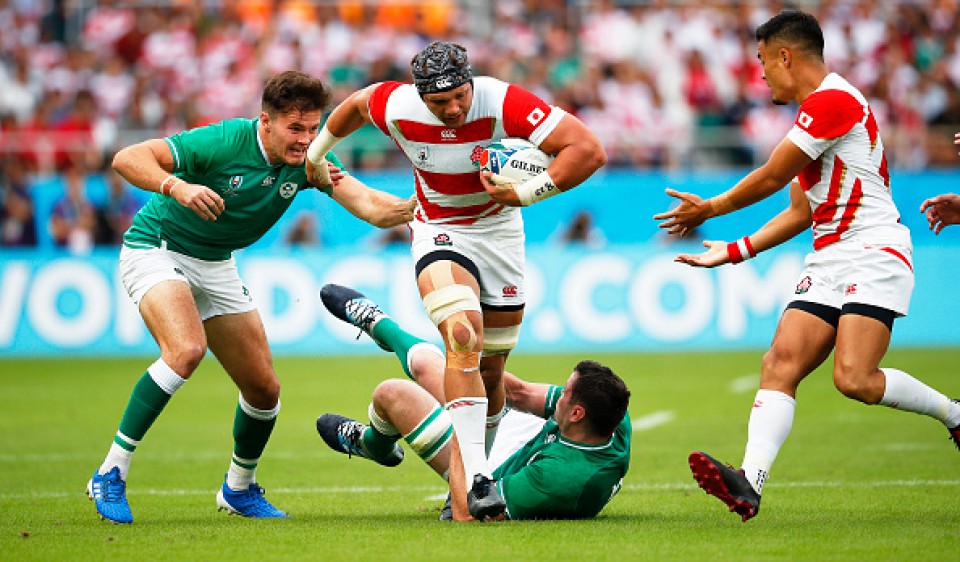 "It was more than the 23 guys on the pitch," he said. "There was a mass belief in the squad and there was the belief we could do something different."

Ireland coach Joe Schmidt was gracious in defeat praising the "energy, intensity and skill that they brought to the game tonight. They are a big team and they played big and were very difficult to contain."

And the stats back that up, as Japan's veterans rolled back the years and the youngsters showed maturity beyond their years.

Horie carried the ball 13 times and ensured Japan's set piece was more than a match for the Irish. 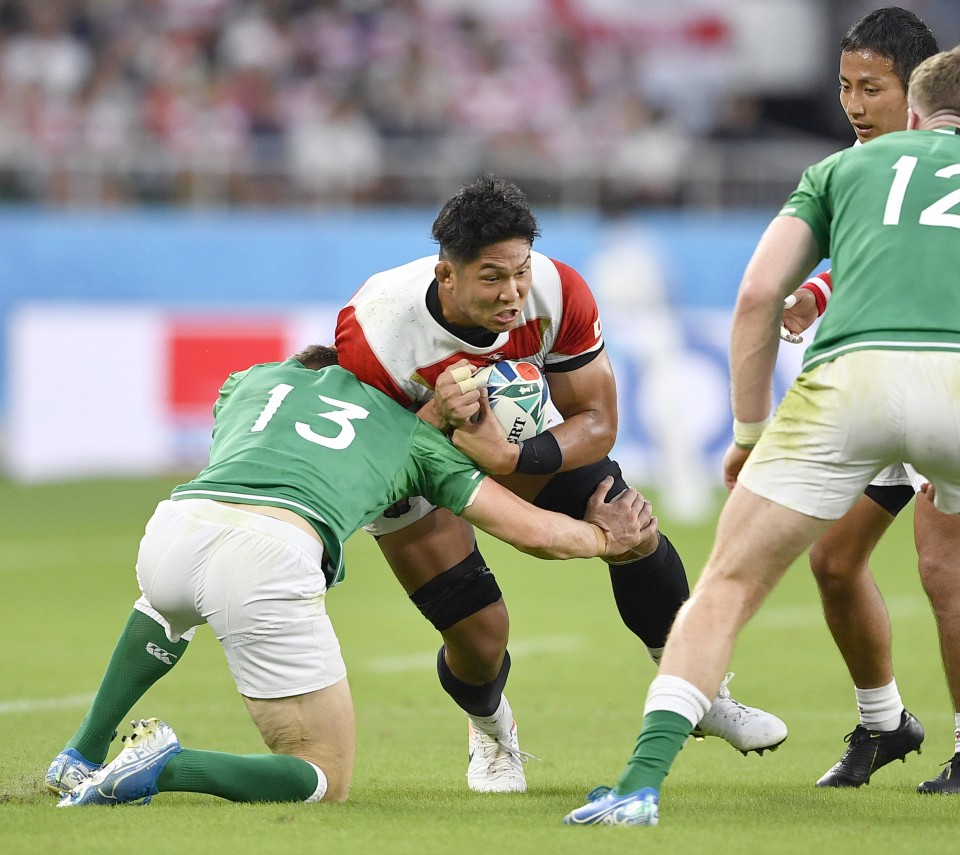 James Moore made 23 tackles, the ageless Luke Thompson 19 and Labuschagne 16 as Japan put in a performance that would have delighted defense coach Scott Hansen, missing just 13 of 171 tackles.

"There were some moments when the players showed some real courage and it is those moments in big games of rugby that turn the game," said head coach Jamie Joseph.

Kenki Fukuoka, who woke up Saturday morning thinking he would watch the game from the stands, ran for 80 meters and scored the decisive try despite not entering the fray until the 49th minute, while Kotaro Matsushima showed the speed, strength and awareness that is fast making him the poster boy of the tournament. 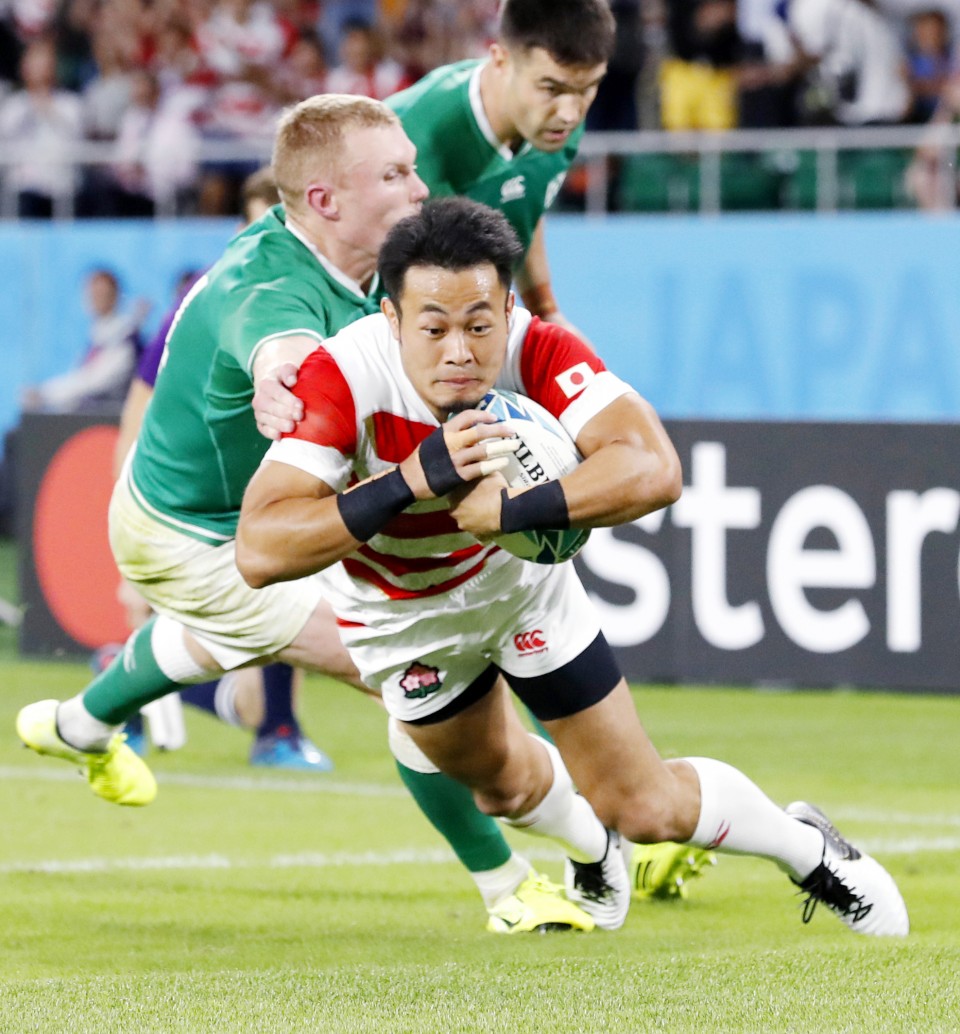 "I'm filled with joy as all the hard work paid off," said Fukuoka. "The call-up came suddenly, but I was prepared."

And of his try he said, "My teammates put their bodies on the line and all I had to do was ground it. I want to thank everyone. The last pass was fantastic."

That last pass came from Timothy Lafaele, who was once again outstanding.

The center's ability to create space out of nothing through some delightful offloads ensured Ireland never knew quite who to defend, as Japan gave the men in green a taste of their own medicine, holding onto the ball for multiple phases.

"Our game plan was to hold the ball a bit more and put the defense under pressure and it showed," said Lafaele.

Yutaka Nagare's speed of pass also helped as did the tenacity and vision of his replacement Fumiaki Tanaka.

And behind it all was that mental toughness.

Going behind to two early tries, with their flyhalf Yu Tamura coming into the game following two below-par performances, the Brave Blossoms somehow dug deep to stay in the game in the first half and then completely dominate in the second.

And that Joseph said was down to the senior players in the team, who all buy into the team culture of "One Team."

"He called me in at the start of the week and said, 'You're not playing this week. The captain needs to be the best player and other players are giving more impact in the game.' So I took it on the chin," Michael Leitch said of Joseph's decision to start the squad captain on the bench. 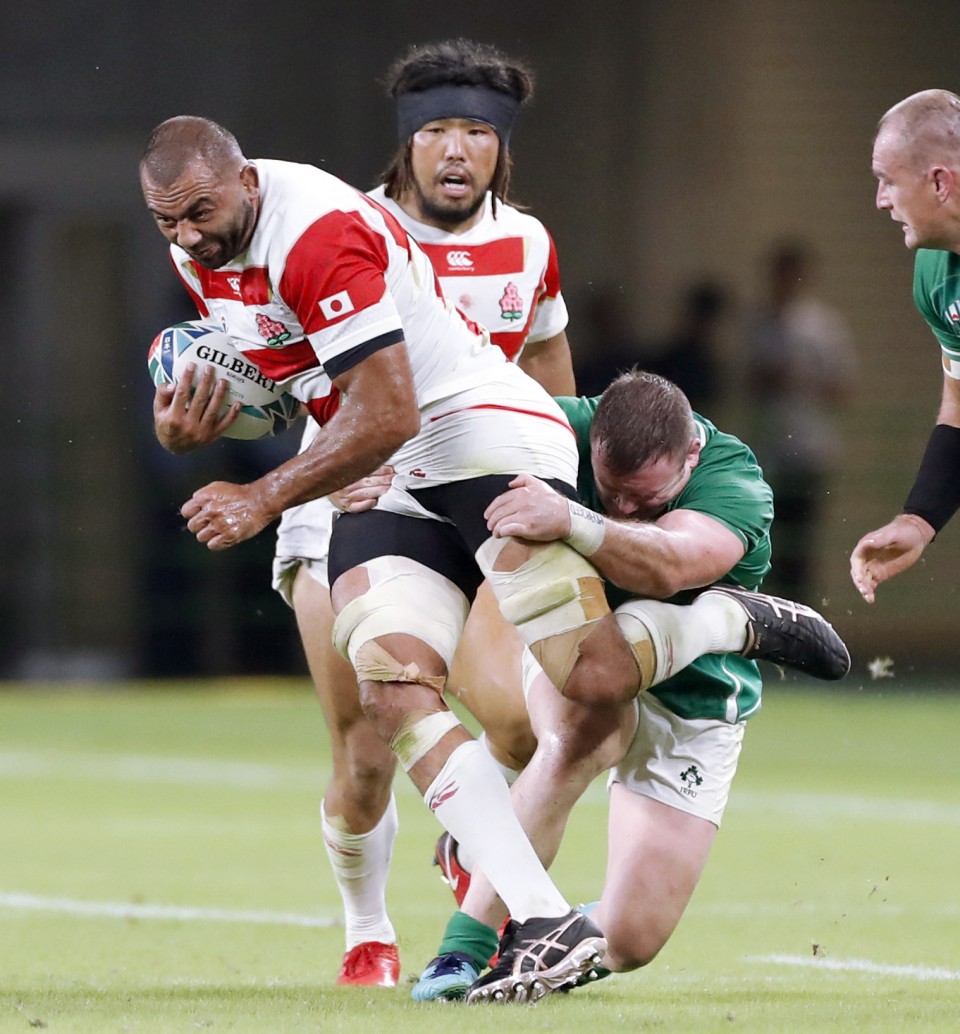 The idea was to bring Leitch on in the final 20 minutes or so to steady the ship but an injury to Amanaki Lelei Mafi saw him enter the fray in the 30 minutes earlier than planned.

"Ah man, it was massive. When he came on, on his first touch he had a good carry. When you have your captain leading like that, everybody just follows," said Lafaele.

"It's about creating leaders for moments like tonight," said Joseph. "All leaders need support. So often (Leitch) is out there stranded by himself. But Lappies (Labuschagne) is there now and Nagare is a good leader so it is that contribution from everybody that allows the players to concentrate on playing. It is about leaders who do whatever it takes to get a result."

It's a result that will go down as the best in Japanese rugby history.