Kamaishi's rugby soul proves a godsend on its road to recovery

The afternoon of March 11, 2011, changed Kamaishi forever. The magnitude 9.0 earthquake that shook the region and subsequent tsunami that took more than 1,060 lives in the small coastal city and devastated countless others.

In the more than eight and a half years since, impacted areas along the northeastern Japan coastline have made major efforts to recover, rebuilding homes, lives, infrastructure, industry and economies. 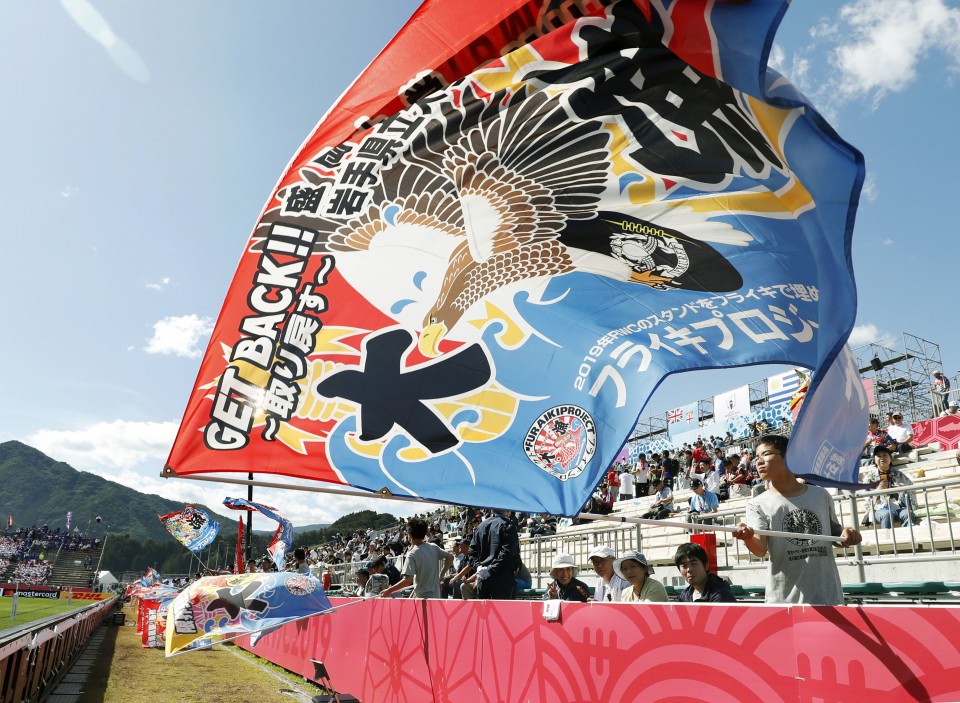 (A man waves a fishermen's flag on Sept. 25, 2019, at Kamaishi Recovery Memorial Stadium in Kamaishi, northeastern Japan, ahead of a Rugby World Cup Pool D match between Fiji and Uruguay.)

There are still many reminders of that fateful day, whether it be the huge, bright white concrete tsunami barriers that impose themselves on each of the picturesque bays along the Kamaishi coast, including one just a stone's throw from the Kamaishi Recovery Memorial Stadium, or the lines painted on downtown buildings showing the height the tsunami's deadly surges reached -- 32.87-meters at their peak.

The Rugby World Cup, however, has offered an opportunity for the city in Iwate Prefecture to look forward, while still remembering that painful past.

When Fiji and Uruguay took the pitch at the Kamaishi Recovery Memorial Stadium on Wednesday, there was a moment's silence held to remember those killed or impacted by the disaster.

Fiji coach John McKee said before the match that the significance of the moment would not be lost on the teams.

"With the moment of silence, there are two things there: the first is to remember the loss of life eight years ago, but it is also important to look to the future and how the area can re-grow. We can see already that there is a lot of development in the area," he said.

"By having games like this in the region, rugby contributes to taking the prefecture forward."

Uruguay assistant coach Oscar Duran said his team has taken strength from what they have learned about the tragedy.

"We find ourselves moved by the extraordinary work that the entire community has put into readying this in only eight years," he said Tuesday. "We are immensely proud to have the honor of coming to this city and witnessing the result first-hand after all that's happened. It's very exciting and motivating."

The stadium itself is a physical representation of the town's determination to move forward.

Seating 16,334 for the World Cup, the new stadium was built on the site of two schools that were swept away by the tsunami. Thankfully, almost no students were killed in the disaster thanks to the quick thinking that sent them scurrying up to high ground nearby. The five that were killed were elsewhere at the time. 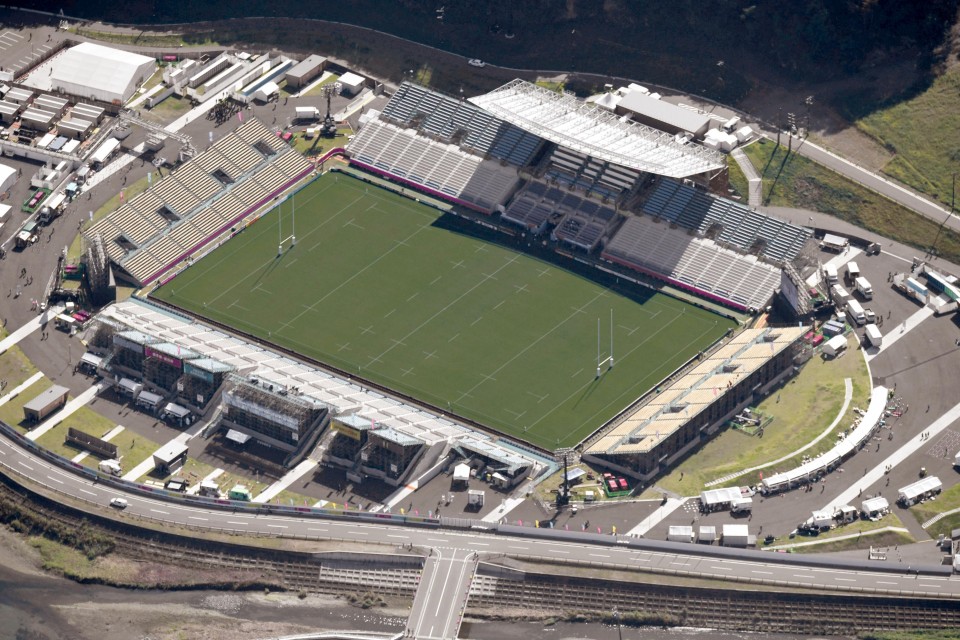 In total, 580 people were killed or remain missing in the Unosumai district that is home to the stadium; it lost more residents than any other part of the city.

Despite the trauma being so relatively fresh, the newly-constructed stadium has provided not only an opportunity for the town to hold two Rugby World Cup games, but also offers hope for the future.

"The most important thing is after the game," said Hideyuki Iwabuchi when he spoke to Kyodo News on a train arriving in Kamaishi on Monday.

"How we are going to use such a stadium and how we will be able to invite more people into Kamaishi city. That is the important thing. We have to connect this opportunity to future opportunity through this World Cup game."

Iwabuchi, a Tokyo-based father of three, was coming to town to volunteer for the local municipality, using his Spanish skills to help any visiting Uruguayans find their way in the city.

"The people from foreign countries who are coming to Kamaishi city is a very good thing. I think so many people are coming, but after the World Cup is much more important," he said.

Iwabuchi, who works as a manager with a major Japanese trading company, has his own personal links to the tragedy with his family hailing from the region. His parents were born in the town of Rikuzentakata, which is about 90 minutes drive south of Kamaishi.

On the day of the disaster, he said he had family members who lost a home. He was working in Chile at the time, meaning he was powerless to help. 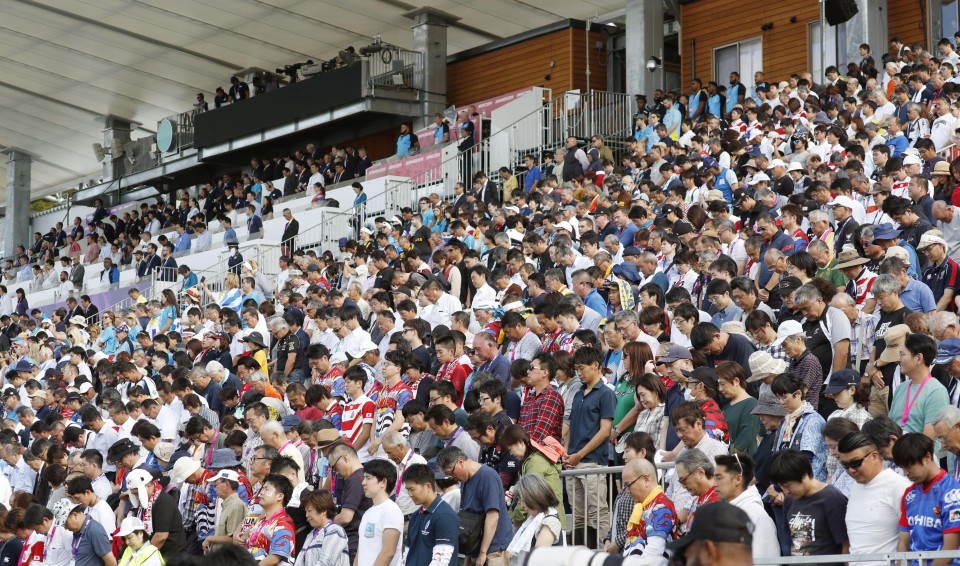 (Spectators observe a moment of silence for the victims of the 2011 earthquake-tsunami disaster, ahead of a Rugby World Cup Pool D match between Fiji and Uruguay.)

"Nobody can imagine the scale of the suffering, because at least in Kamaishi city more than 1000 people died and some people are still missing," he said.

"I could not do anything to help. I was outside the country, so I have always thought about some possibility to return to the prefecture...I am very happy I could find this opportunity to be involved as a volunteer to help this city."

Iwabuchi points out that reconstruction and the pumping of funds into impacted areas can only do so much, as it is the loss of human capital that still has the region reeling. 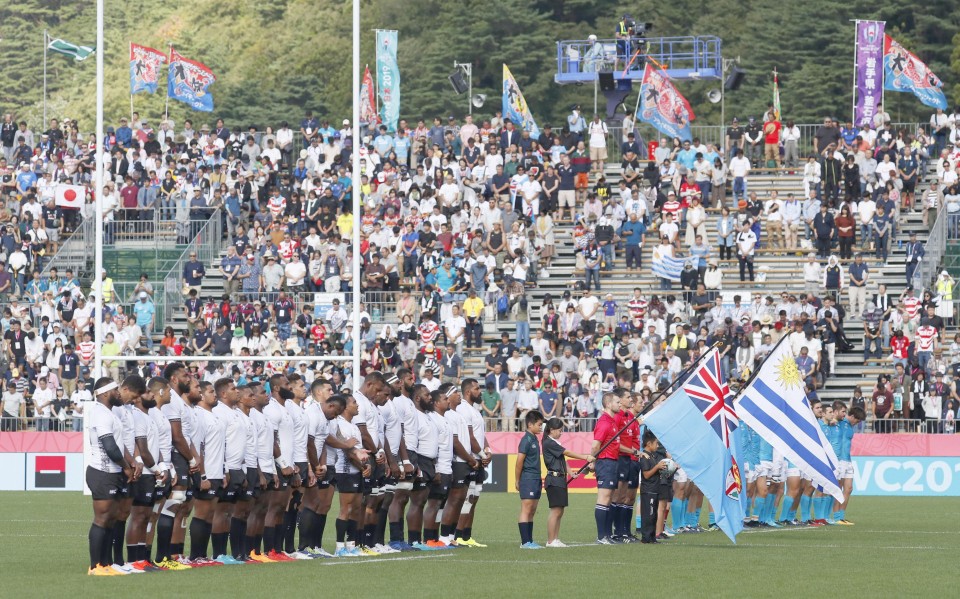 (Fiji, left, and Uruguay players observe a moment of silence for the victims of the 2011 earthquake-tsunami disaster, ahead of the match.)

"The situation is much more serious because, according to the results of the earthquake, more of the population of the city has gone and most of them have not returned yet because there are no jobs and there are no sufficient places to live. So there are many things to be solved in the future."

Rugby is perfectly placed to help solve at least some of those problems, and not just because of the World Cup.

Kamaishi is a rugby town. The local Nippon Steel Corp. team had a long and decorated history in the sport, having won seven national titles in a row between 1979 and 1985, before they were disbanded and handed over to the local community and became known as the Kamaishi Seawaves.

"Rugby in this community is very important and I think they identified that as being a very good fit in a World Cup like this," World Rugby CEO Brett Gosper said Wednesday.

Kamaishi's rugby blood was made very clear to one of those most impacted, Rui Horiguchi, who was one of those forced to flee to higher ground when Unosumai Elementary School was inundated. 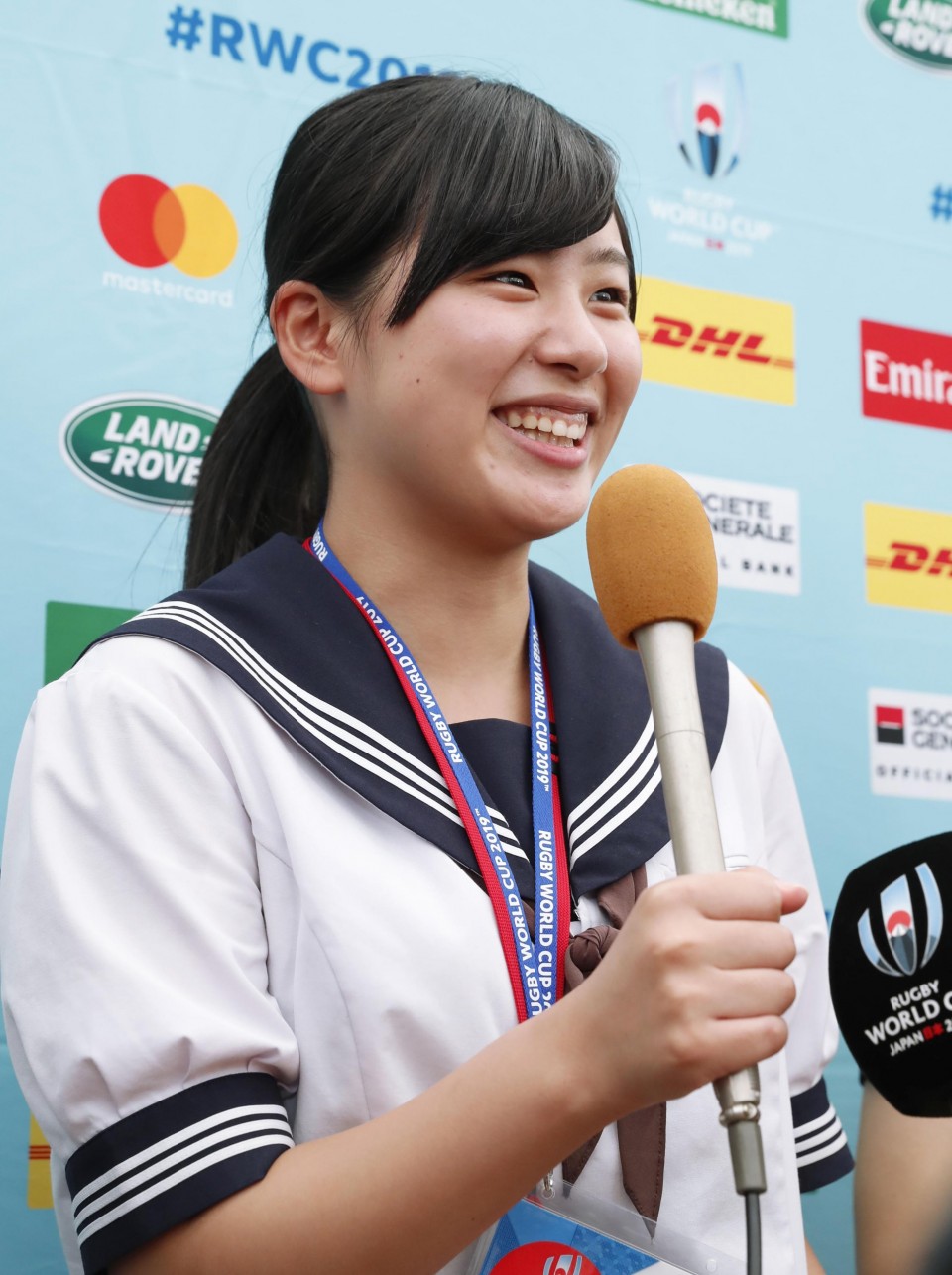 "After the disaster, there was a huge amount of change in the city, but once it was decided that Kamaishi would host the Rugby World Cup there was a huge increase in the speed in which the reconstruction could take place," she told the media ahead of Wednesday's game.

"From that, I really understood why Kamaishi is known as a rugby town and it is thanks to that project that the city was really able to come together to make today possible."

Scott Fardy, a member of the Australia team at the 2015 Rugby World Cup, is a former Seawaves player who knows from his time here just how deep the rugby roots run, and he is a great advocate for the area. 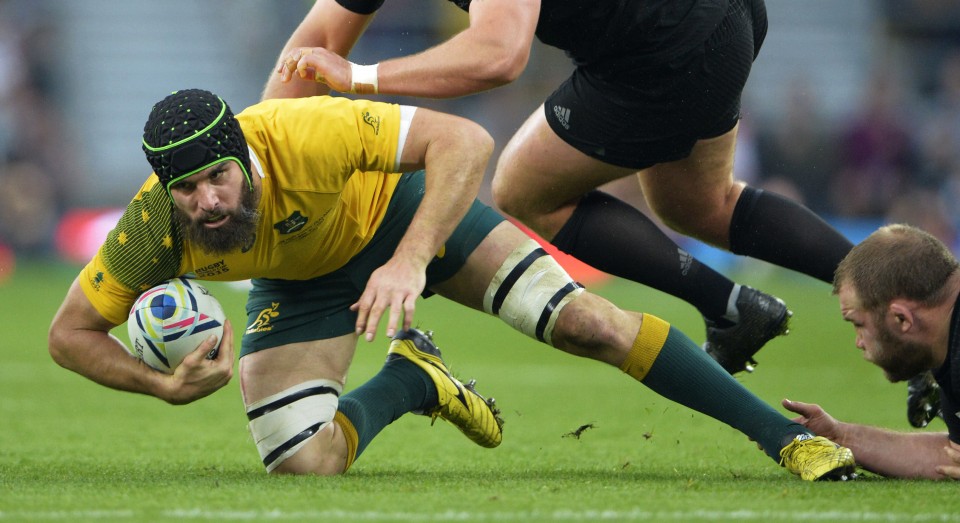 "Anyone who comes here can find a really authentic Japanese experience. I think (it will be obvious) if more people make the effort to jump on the shinkansen and come up and have a look...I think the World Cup can really help tourism here."

"This is really authentic Japan and there is no place like this. The people are special, they are quiet and they are unassuming but they have big hearts."

And Fardy knows about heart.

When the disaster struck in 2011, he was living here and playing for the Seawaves. His career in Australia had stalled and he had moved to Japan on a one-year deal in hopes of getting it back on track.

When the quake-tsunami disaster occurred, Fardy was right in the middle of the aftermath, and when the Australian Embassy offered to evacuate him, he refused and chose to stay to volunteer, helping with the delivery of essential supplies to stricken communities. His efforts sealed his status as a local hero.

He loves the place so much that he ended up playing here for three seasons, and made a special trip back for Wednesday's game despite his season with his Irish club Leinster starting in a matter of days.

"I came specifically for this, just for this game," he told Kyodo at the Kamaishi fan zone where he was catching up with some former teammates. "Our season starts on Saturday, so the coach was nice enough to give me one week off to come to this and it is something I am very grateful for."

Another Australian, Al Graham, traveled here on Monday to watch the game between Uruguay and Fiji. A marine biologist based in Hobart, Tasmania, he said he was not totally aware about the scale of the disaster when he decided to buy a ticket for the game.

"I knew about the tsunami because of Fukushima, (but) I didn't know it affected this city until when, I think, I started researching where the games are going to be."

"I don't know whether it is because of the tsunami that I chose to come here, but it is more the case that it is a small city, a town more than a city," the father of two said.

By enlightening people like Graham about the disaster, the benefits of the World Cup can be spread wider than just here in northeastern Japan, something that Horiguchi hopes is a lasting benefit of her city's suffering.

"I hope that people who are here today take away some of the history of this place and perhaps some of the lessons that can be learned about disaster preparation and prevention," said the now 18-year-old who has become the face of local children after she gave a famous speech at the 2018 opening of the stadium.

"And if that goes on to save any lives in the future, then that would be incredible for us."