Shizuoka Prefecture may not be the first place that pops up in people's minds as the country's culinary center, but the central Japan prefecture has rich local cuisine to offer visitors during the Rugby World Cup.

Shizuoka's cuisine is characterized by fresh seafood, such as bluefin tuna and "sakura ebi," tiny and transparent pink shrimps, due to its location on the Pacific coast.

Green tea is another specialty of the prefecture. For visitors with a sweet tooth, baked goods and confectioneries using green tea may be a perfect choice to satisfy your cravings.

But for those rugby fans out celebrating or looking back after a match at Shizuoka Stadium Ecopa, some warm, traditional comfort food may be exactly what they need.

"Oden," a simmering broth with tasty ingredients, is one of the most popular dishes in Japan in autumn and winter. But Shizuoka's oden has a unique twist and is different from that sold in convenience store chains or in other parts of the country. 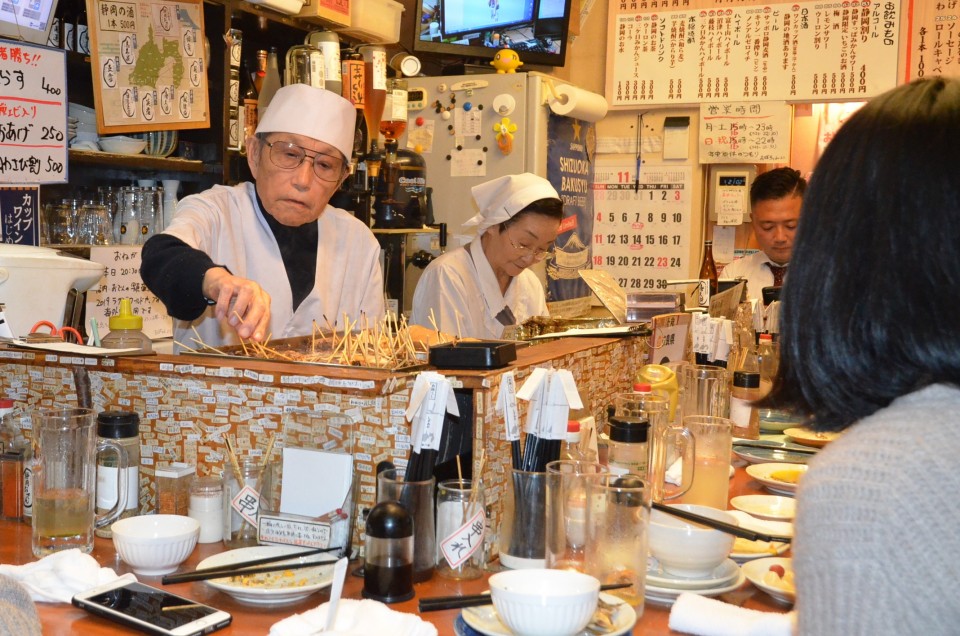 (Isamu Kanazashi, left, at an oden eatery in Shizuoka)

There are two alleys in the city of Shizuoka with stores dedicated to serving Shizuoka-style oden, in which ingredients are skewered on sticks and simmered in a black broth made of soy sauce and beef sinew.

Takashi Sugiura's store, Odenya Obachan in Aoba Yokocho, one of the alleys, is usually packed with people. He keeps a notebook in which he asks visitors to leave messages and there is praise written in languages such as English, Chinese and Thai.

"Not just the taste of the oden, but I think another attraction is sitting at a bar and talking with other visitors," Sugiura said. "I hope more foreign visitors experience this."