Mamoru Morita has already achieved fame in Saitama Prefecture because at 87 years old he is still making moves on the rugby pitch.

Now the octogenarian, who plays senior amateur matches every Sunday, has a renewed sense of excitement with the Rugby World Cup coming to his home prefecture next year.

Kumagaya, north of Tokyo, may be best known as a city with good access to the capital or for recording a record high of 41.1 C during the heat wave that struck Japan in July.

But having become one of the host cities of the sport's global showpiece in a public-private effort, local residents hope Kumagaya will consolidate its status as the rugby town of eastern Japan.

"In Rugby, you ram an opponent with full force and you learn to become tenacious," Morita said after playing the first five minutes of a match in Saitama, highlighting the appeal of the sport he has played for over 70 years.

"Younger people seem to get encouraged by the fact that I still play rugby. I will play as long as I can, definitely until I can wear the golden pants," Morita said, referring to the color of pants reserved for players over 90 in the Buwaku senior amateur rugby club in Saitama. He is still in purple pants. 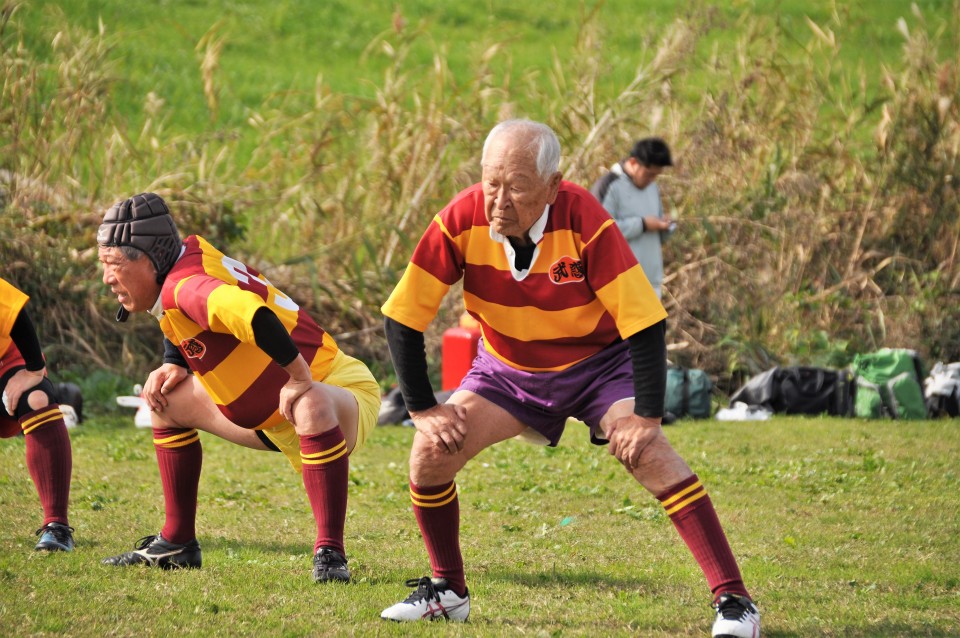 Even though Kumagaya has historical ties to rugby, the city was not included in the list of host cities when it was decided in July 2009 that Japan was to stage the Rugby World Cup, most likely since its rugby stadium lacked the capacity to seat large crowds.

Against the odds, an ambitious signature-collection campaign was launched in a bid to host World Cup games, with the target to collect at least 1 percent of Saitama's total population of around 7.3 million. Kumagaya alone is a city of some 200,000.

In the end, the signatures topped 100,000, one of the highest among other municipalities vying to host the World Cup, leading to Kumagaya in March 2015 winning the right to host.

"The signature collection showed that citizens, even those not related to rugby, were passionate about bringing the World Cup here," said Hideaki Shimamura, managing director of the Kumagaya municipal government's office to promote the World Cup. 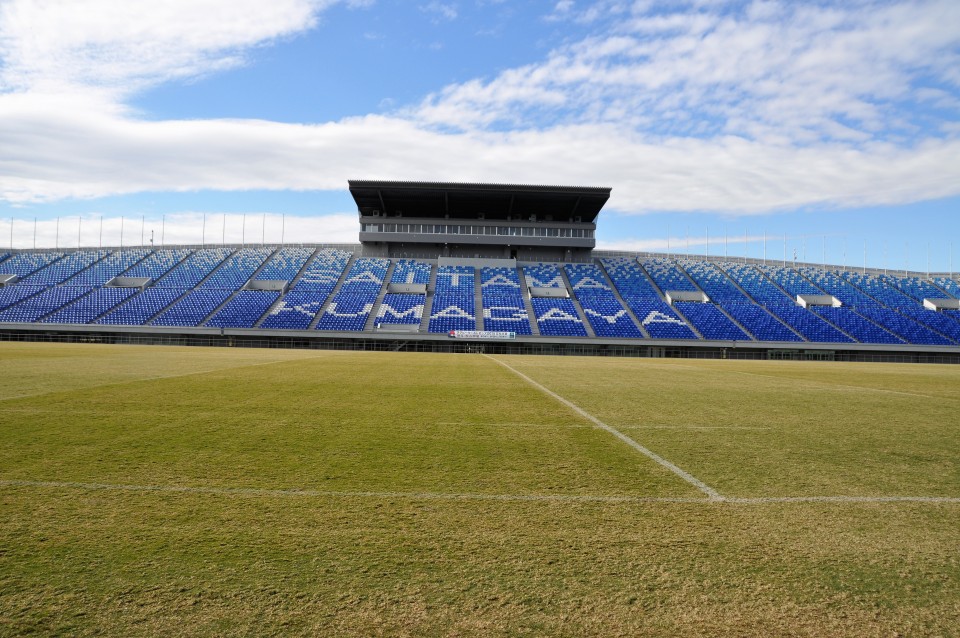 "Everyone was looking in the same direction in the bid and I hope that such unity continues" such as through watching the matches live, in fan zones, or by organizing various initiatives to accommodate foreign visitors, said Shimamura.

Kumagaya is one of the few World Cup hosting municipalities that has a stadium built exclusively for rugby, whereas the matches in most other municipalities will be played in soccer stadiums.

Next year at Kumagaya Rugby Stadium, Russia will face Samoa on Sept. 24, Georgia will play Uruguay on Sept. 29, and Argentina will take on the United States on Oct. 9.

The stadium, which seats 24,000, was renovated ahead of the World Cup, adding spectators' stands that are as close as 8 meters to the pitch. With a slope of up to 35.5 degrees, spectators can also enjoy a dynamic view of the action.

An 811-inch screen has been installed on one side of the stadium, with another 473-inch screen expected by next June, to allow spectators to check plays and see close-up expressions of players.

A total of 170 seats, eight 10-seat boxes and a lounge are set aside for VIPs, and four ice baths have been placed next to four circular-shaped locker rooms as a measure to ease player fatigue.

"We have made a stadium where spectator stands and the field are close so that anybody from any seat can feel the vibrancy of the plays. The front rows can almost high-five the players," said Satoshi Hori, an official at the Saitama prefectural government who has worked on the stadium since April last year.

"As such a wonderful stadium has been made, it will be a total waste not to expand its use after the World Cup. We could also organize tours of the stadium or put memorial goods on display," Hori said, noting that star Japanese players Michael Leitch, Ayumu Goromaru and Kotaro Matsushima competed at the venue when they were in high school. 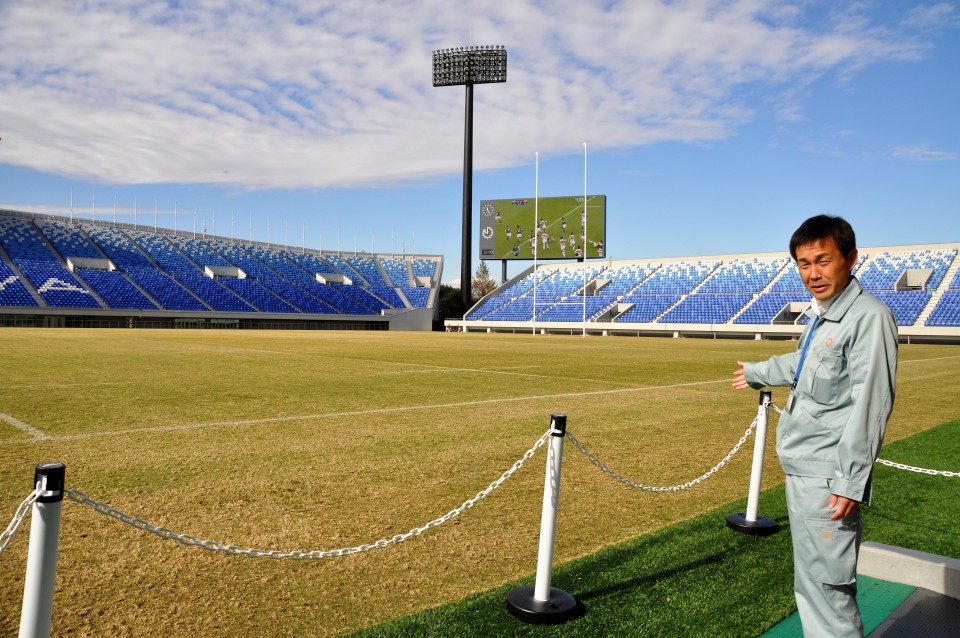 (Satoshi Hori, an official at the Saitama prefectural government, explains about the renovated Kumagaya Rugby Stadium)

The stadium is also part of the Kumagaya Sports & Culture Park that is designated as a national training center for the country's rugby sevens teams.

"You can even hear the sound of the players pushing into each other at this stadium. I hope everyone will enjoy it as if you are on the pitch," Saitama Gov. Kiyoshi Ueda told a crowd at an event marking one year to go before the World Cup in Kumagaya.

There are already signs that interest in the sport has increased in Kumagaya since the announcement that it will host the World Cup, according to Mineharu Uchida, coach at a local rugby school with about 100 students.

"We teach rugby to children of all ages from preschool to sixth grade. The sport teaches the importance of teamwork and manners," Uchida said. "Students acquire better communication skills as you cannot play rugby by yourself and you need to connect passes in order to win."

The local women's professional team, Arukas Kumagaya, launched in 2014, have also garnered more fans after contributing seven players to Japan's national squad which qualified for rugby sevens at the 2016 Rio Olympics. Supporters hope more of them will book spots for the 2020 Tokyo Olympics.

The Arukas players are also working to help spread their sport by teaching non-contact rugby, called tag rugby, at all 29 elementary schools in Kumagaya.

"Because of Arukas, more girls are also coming to learn rugby," said Uchida. "Hopefully, more and more people will get acquainted with rugby following the World Cup. Kumagaya already has a great environment for it."

As for Morita, he just hopes the comradery of rugby at the World Cup will inspire others to keep the passion going.

"I have made so many friends through rugby. The spirit of how competitors from both teams get together and respect each other's performance after a game, or the 'one for all, all for one' ethos is great. I hope this spirit will prevail following the World Cup." 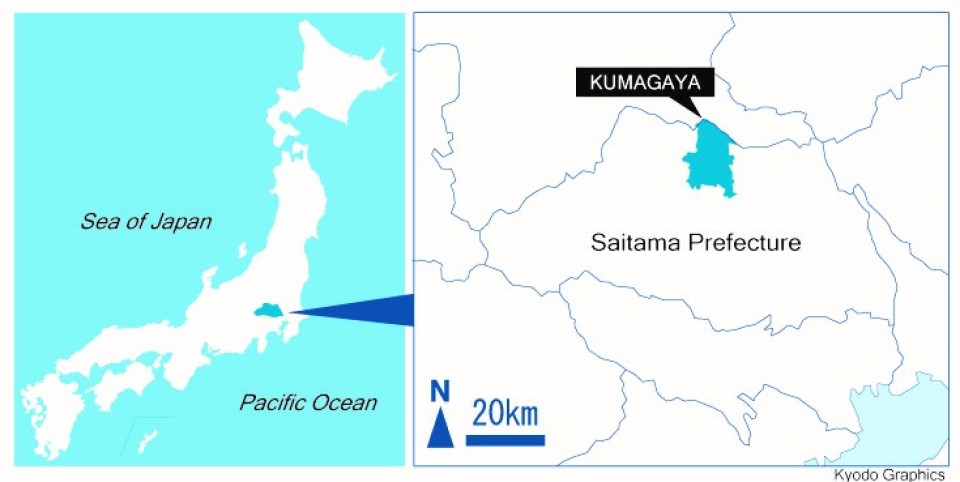