Yurie Endo was surprised more than 10 years ago to find people she met at her university in Tokyo knew more than she did about the rich rugby history of her hometown.

"When I said I was from Kamaishi, one said, 'Hey, I know that rugby town,' and another said, 'You must be a big fan of rugby,' which baffled me a bit," Endo said, recalling a time when she was still unaware how influential the Kamaishi name was in rugby circles throughout Japan.

"Those reactions just made me wonder why my hometown was so famous in places like Tokyo" said Endo, a Hosei University graduate.

The birthplace of Japan's steel industry, Kamaishi is also a rugby mecca -- and, unfortunately, the scene of one of Japan's worst tragedies in recent memory.

Endo, 34, is now back in Kamaishi as a big fan of rugby, proud after the city in Iwate Prefecture was chosen as one of the 12 host venues for the 2019 World Cup, even as it struggles to recover from the aftermath of the 2011 earthquake and tsunami that devastated the northeastern region.

She is now involved in operating Rugby Cafe, which served as a meeting place for citizens to discuss the city's bid to host two World Cup games next year. She is also involved in a nonprofit organization that is dedicated to promoting international exchanges among young people amid the post-disaster reconstruction. 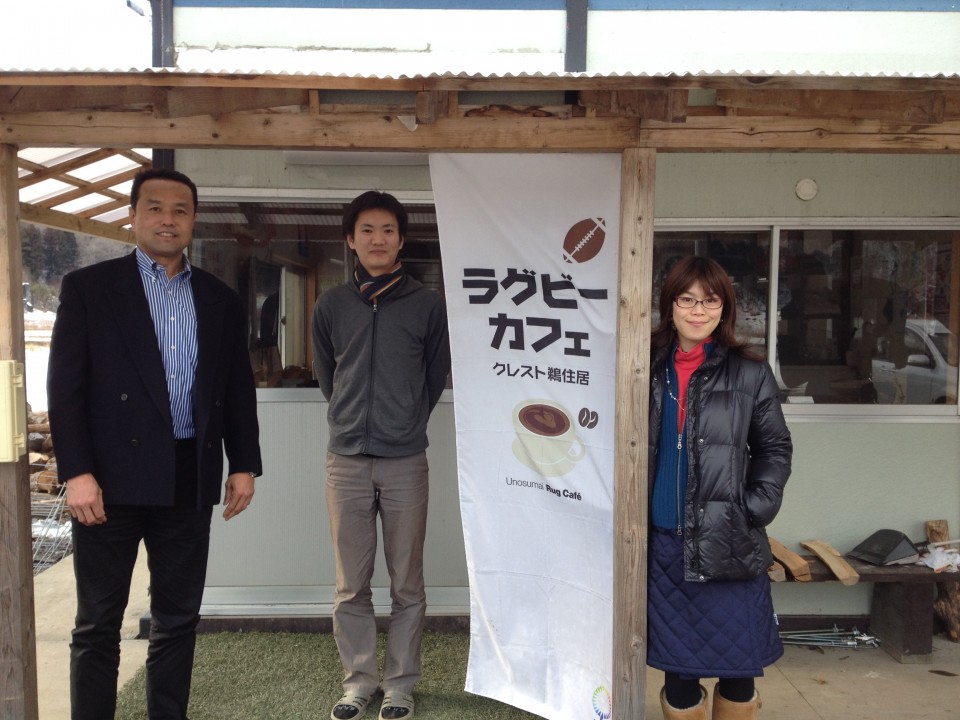 "I hope the World Cup will help enhance exchanges among people both in and outside Kamaishi as well as foreign countries" and help accelerate the city's recovery from the disaster, Endo said.

Through her conversations with friends at Hosei, which had a strong rugby team at the time, and others in New Zealand, where she studied abroad, she became aware of the sport's appeal and a Kamaishi history barely known to her.

Kamaishi is home to the now-defunct Nippon Steel Corp. team, which won an unprecedented seven national championships from 1979 to 1985. The side, dubbed "Kita no Tetsujin" (iron men of the north), saw many members join the Japanese national team.

The feat, for Endo and many other younger residents, however, seemed all but a footnote in Kamaishi's glorious past. She was a baby when the Nippon Steel team claimed the last of its seven consecutive titles and she grew up as the excitement over the achievement began to wane.

The performance of the corporate team declined in the late 1980s and '90s. It was relegated to the second-tier corporate league in 2001 and reorganized as a multi-sponsored club team, the Kamaishi Seawaves, the same year.

On March 11, 2011, Kamaishi was rocked by a powerful earthquake and tsunami. The disaster wrought havoc on the city, but its recovery efforts then became a driving force behind its bid to be part of the global event as a symbol of reconstruction.

The magnitude-9.0 earthquake and ensuing tsunami washed away or damaged almost every building in many areas of Kamaishi. The disaster killed 1,064 people, or some 3 percent of the population, and forced up to 9,883 survivors to evacuate their homes.

Endo watched her hometown devastated by the high waves on TV in Auckland, New Zealand.

"First I wanted to go home quickly. But I realized that was not the best idea given the situation where even my close family members had to take shelter without sufficient food," she said.

Seven months later she returned to Kamaishi and set up the nonprofit Kamaishi Link in 2012.

The idea of hosting World Cup games sounded unrealistic in Kamaishi or drew sharp reactions among disaster-affected residents. A small number of people, including former star players of the Nippon Steel team, had to take a low-key approach to the bid. 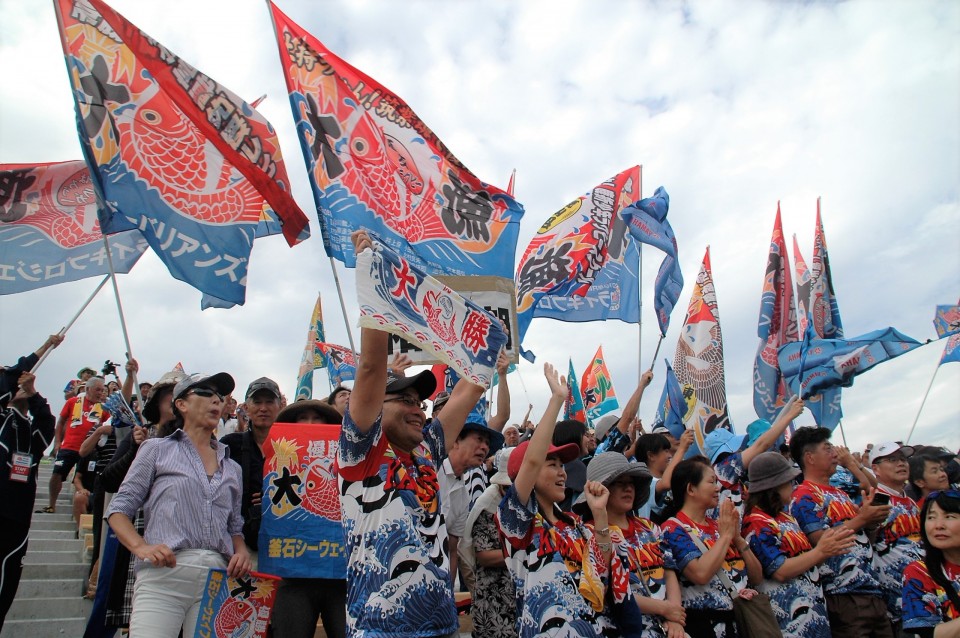 "My first reaction was: What in the heck are you talking about?" Kazuyuki Fukunari, a 71-year-old dentist and longtime rugby fan in Kamaishi, said.

"But later I came to think that might be a good idea because efforts to host a World Cup game could speed up reconstruction work," Fukunari said. He led a group of Seawaves' supporters in the bid.

Yoshihiko Sakuraba, general manager of the Seawaves, said he was caught in a dilemma. "Personally I really wanted to see a World Cup game here. But as a local club team we stopped short of freely saying it in public as we needed to be fully mindful of the hardships of disaster-affected people," said Sakuraba, a 51-year-old former Nippon Steel lock.

In October 2013 Endo was offered an opportunity to operate Rugby Cafe, where citizens could gather to promote the bid. Kazuki Hirota, who is from Matsudo, near Tokyo, joined her in various promotional activities at the cafe, which is housed in a prefabricated building in Unosumai, an area near the sea hit hard by the tsunami.

"Rugby Cafe was between a shelter nearby and restrooms. Evacuees would drop by on their way back to the shelter," said Hirota, 32.

"They just chatted while looking with curiosity at what we had put on display in the room" such as old Nippon Steel jerseys, autographed balls and a figure featuring Nippon Steel fly-half Yuji Matsuo, he said.

"At first, the World Cup bid did not seem real to most people I talked to there," said Hirota. He had some relatives in Kamaishi and the vicinity and moved to the city after the disaster as a volunteer worker without any long-term plan.

Endo and Hirota, who played rugby in high school, talked with visitors about the city making a bid to host a World Cup game while serving free coffee. They also sometimes helped organize knitting workshops there.

Former Prime Minister Yoshiro Mori, who serves as the honorary chairman of the Japan Rugby Football Union, was among visitors to Rugby Cafe in 2013.

"It was around 2014" when a growing number of Kamaishi citizens started to talk about the possibility of the city actually hosting a World Cup game, Fukunari said.

"A woman was critical of the idea in a town hall meeting on the reconstruction of the Unosumai area. But she said it might be worth thinking about in a similar meeting the following year, which was impressive to me," he said. 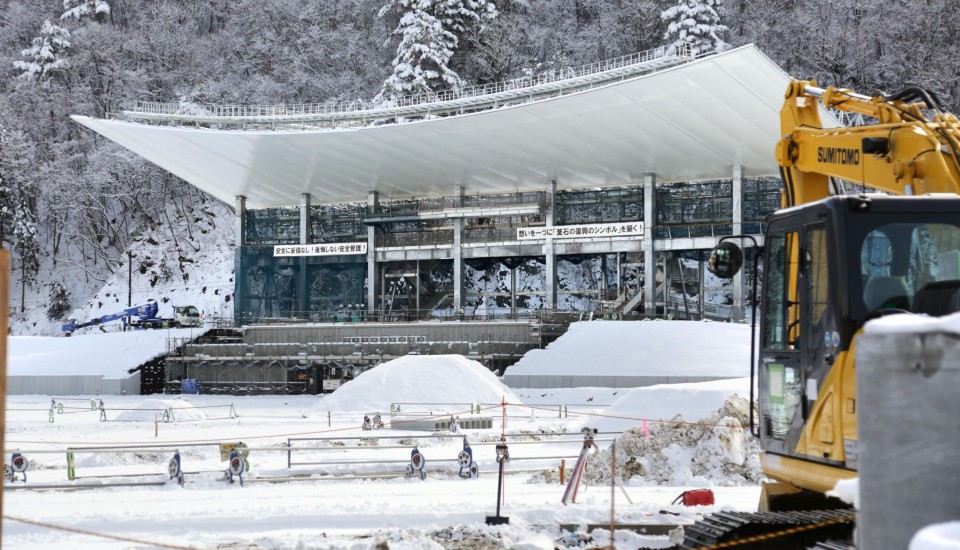 Kamaishi, a small fishing town more than 400 kilometers northeast of Tokyo with a population of 35,000, formally tossed its hat in the ring to host World Cup games in July 2014.

The organizers picked Kamaishi among the 12 host cities the following year, although it was far smaller than any of the other venues in terms of economic size and population. Locals are hoping a surge in tourism triggered by the hosting of the World Cup will spur the city's economic future.

Rugby Cafe was temporarily closed in 2014 as the building had to be removed due to reconstruction work. But it reopened the following year in a building next to JR Kamaishi Station. Hirota works at the Horaikan inn in the city, a hub for rugby fans.

"Honestly I couldn't take pride in myself when I was young as I was from the Tohoku region," Endo said, referring to the northeastern Japan region, which is considered somewhat of a backwater compared to other regions of Japan. Tohoku is known for its cold and severe weather.

"But Kamaishi's hosting World Cup games should be good news for Tohoku," she said. "I was overwhelmed to see so many people line up awaiting the opening" of the new stadium.

"If the World Cup games in Kamaishi don't go well, there would have been no point in Japan hosting the event," Japan star rugby player Ayumu Goromaru said after the opening of Kamaishi Unosumai Memorial Stadium, which was packed with some 6,500 spectators.

The stadium will host a game between Fiji and Uruguay on Sept. 25, 2019, and another on Oct. 13 between Namibia and the winner of November's four-team repechage in France.

"I hope the new stadium will be a new symbol of Kamaishi rugby and many people overseas will find out about it," Endo said.